Ever since vaccination arrived in the West in the late 18th century, it has been dogged by controversy, and an exhibition seeks to shine a light on the often overlooked history of early anti-vaccination protests, and the medical harm they caused.

Although vaccination was sort of known about, it was famously Edward Jenner’s now deeply unethical experiments which proved that a folk medication was in fact scientifically viable.

Thus persuaded, doctors sought to immunize the public — but the public refused to be so protected. Frustrated, the government, in 1853 made vaccination for babies compulsory.

Anti-vaccination movements sprung up, and it was as much against the doctors as it was against government attempts to interfere in people’s private lives.

At the time, the government was still a small thing that was mostly concerned with matters which barely touched ordinary folk, and to have the government force this alien medication upon people was seen as an overreach of government authority.

The exhibition shows off some of the leaflets published by the anti-vax movement, and the contrary publicity put out by governments. It should seem strange that in a time when people would be routinely disfigured by smallpox that a cure would be so strongly opposed.

Models in wax made at the time show how disfiguring the disease can be, and photos of young boys covered in pustules can seem as alien to our modern eyes as the vaccines themselves seemed to Victorians. 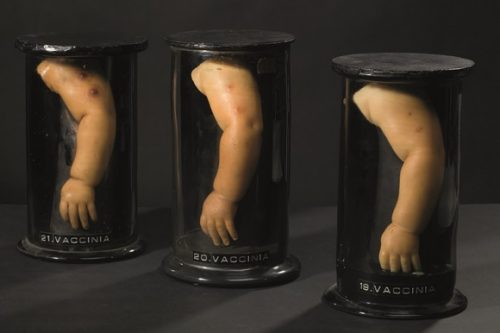 Courtesy of the Hunterian Museum / On loan from the Goron Museum of Pathology, King’s College London

Curiously, the rise of the welfare state was also to see the end of compulsory vaccination, with the government hoping that education and more widespread access to general medical care would persuade people of the benefits. The exhibition touches on the 20th century and the great global attempts to eradicate these scourges of mankind.

Today though, the anti-vax movement is once more growing, thanks largely to the discredited lies peddled by Andrew Wakefield.

The models and photos on display are a timely reminder of what used to be normal for humans, and how dangerous the anti-vax movement can be in perpetuating a deadly disease.

The exhibition, Vaccination: Medicine and the masses is open until 17th September, and entry is free – it can be found inside the Hunterian Museum, within the Royal Society of Surgeons of England [map link].

And if you’ve never been to the Hunterian Museum, pay a visit, it’s a marvel.

The museum is open Tuesday-Saturday, 10am-5pm

Photography is not permitted.