If you thought snow fell from the sky as a natural phenomena, then let me dissuade you of that old-fashioned thinking.

In our modern age where we expect nature to confirm to our requirements and calendar – snow is imported and distributed overnight when most of London is asleep.

People have claimed that I am making this up and that councils wouldn’t be gritting roads if they were the ones laying down the snow. Fools! That’s not grit they are spreading, but compressed pellets of snow contained in brown beads that melt overnight, releasing the snow to cover the streets!

After many years of trying, I have finally managed to take a photo of London’s secretive snow-barges, caught catastrophically during the daytime for everyone to see.

Here at last is proof that the large open-topped containers full of imported Chinese snow do exist! 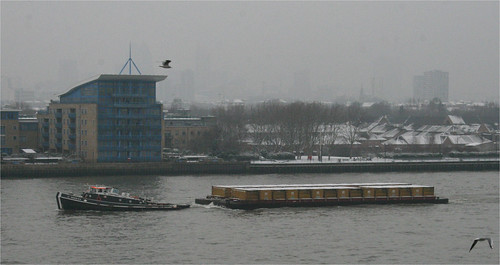 The fact that central London had little snow, while the suburbs have been knee deep in it is another example of Mayor Boris’s favouritism for the outer boroughs. As a central London resident, I demand more snow!