If you walk down Rathbone Place, which leads off from Oxford Street you might notice a rather fine old fashioned looking pub on the right hand side – The Black Horse. Take a closer look and notice the alleyway next to it. 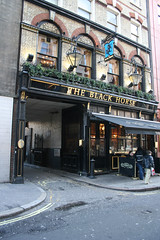 May not look like much, but it is another one of those overlooked bits of London history.

This is Evelyn’s Yard – and is named after the noted diarist, John Evelyn. He is most famous for his writings about the Great Fire of London in 1666 and his grand plans for the relaying of the city along a scheme which created wide roads and moved industry to the East-End of the city. His plans were never carried out as they were far too expensive and would have taken too long to impliment. As a result, much of the city was rebuilt to its old design, which in part is what saved all the old tiny alleys that litter the place.

The Yard itself is alas, nothing much to look at anymore as all the old buildings around it have long vanished. Aptly considering the constantly changing nature of the Yard, when I visited the other week, the central area which had been dominated by a large office block was now an empty hole in the ground as the old building had been demolished. 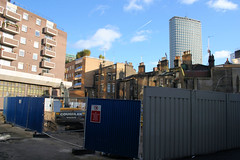 The replacement building does however look rather nice, although as is the norm with architect renditions – the image is ignoring the rest of the Yard which is less interesting to look at.

The yard itself existed at least as far back as 1746 according to John Roqueâ€™s Plan of the Cities of London & Westminster, although it was called Black Horse Stables. The yard was later renamed as Evelyn’s Yard, but at the time it was created – it was genuine horse stables for the several coaching inns which were in the area. Slightly confusingly, there was a second larger Black Horse Yard just a few yards away as the crow flies – but with its entrance on Tottenham Court Road. I can imagine that caused a lot of problems with carriages going to the wrong stables.

The renaming probably solved a lot of those problem.

The Black Horse pub, whilst looking quite old – the frontage is actually from the early 20th century. But at least it is a good rendition of an older frontage and fits in well with the heritage of the area. Karl Marx once addressed a crowd in this pub, so if you want to tread in his footsteps, here is a chance for a pint as well.

The proposed new building inside the yard