Although London’s cable car is something that divides opinion, largely down political allegiances, it is fairly undeniably an engineering triumph, and this morning a talk was held at the Building Centre to look at this aspect of the project.

The three speakers, in order were:

The TfL representative discussed the rationale for a crossing of any sort at this location which was demonstrated with some slides about transport problems in the area. A plan for a footbridge was quickly dropped because, surprisingly, it would have cost even more than the Cable Car – at around £80 million and would have been just across the river, leaving people with a walk through industrial estates to get to the docks/excel.

Oh, and it was unlikely to be sponsored. If people complain about the taxpayer bill for the Cable Car, just imagine the fuss the footbridge would have caused! 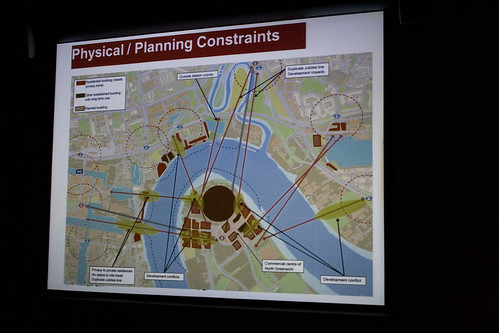 The site itself is surprisingly difficult to work on and goes some way to explaining why it goes from where it does to where it does. I already knew that the piles driven down to support the pylons were exceptionally deep, in large part due to the area being a former marshy bog land.

However, the tallest pylon is also right next to area safeguarded for the theoretical Silvertown road tunnels. Hence, the foundations have to be even deeper than that so if the tunnel is ever built, the digging won’t cause the pylon to lean over. 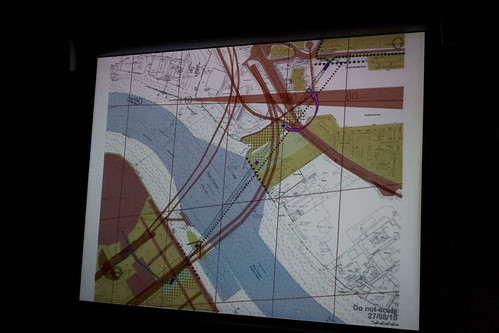 What looks at the surface to be a mundane building turns out to have some interesting foundation issues then.

They also had the famous issue of height which worried people about planes crashing into them – but the pylons have to be tall enough so that they match the height of the QE2 bridge at Dartford for cruise ships.

Considering how exposed the pylons are, they also tested models in wind tunnels. 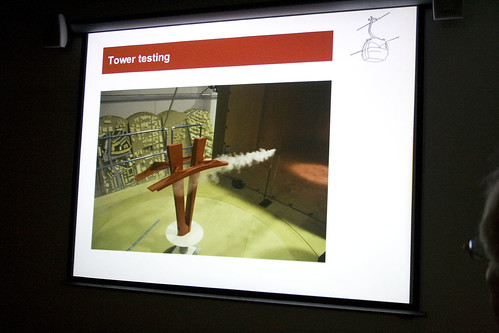 Another issue which was curious and I may have misinterpreted the information – but it seems that the cable car was already on TfL’s radar when Boris got involved, and vocally drove the project forward. They may have just pulled forward an existing plan by using the sponsorship funding. Or I may be wrong about that – it’ll probably be lost in the depths of political debate.

Having secured permission, the contractors submitted their bids.

The contracts were awarded on the 14th April, and the first pile was driven on the 26th June, which is an exceptionally short timeframe. One year and two days later, on the 28th June, the completed cable car opened to the public. Frankly, that’s pretty darned good for any construction project.

A total of 450,000 man-hours were consumed, and no serious injuries caused.

In terms of construction, although we think of it as a single project, from their perspective this was five separate sites: two stations and three pylons.

You may be aware that the pylons were erected in pre-fabricated pieces and built upwards. There were early proposals to built them lying down, then hoist them upright very much as the London Eye was. Practicalities aside, it would have been quite something to watch!

They also came up with a novel way of constructing the tallest south pylon which is in the river and avoided the use of a cofferdam by driving down the piles then dropping a preformed 100-ton concrete skin over the top. That saved 6 weeks of construction work.

The pylon nearest the DLR on the north side while apparently sitting on dry land is in fact on top of an old dock. They had to drive very deep piles down to puncture the bottom of the old dock and get stability.

The pylons also almost ended up as a wire mesh design. I am personally rather pleased they ended up with the helix design. It’s quite elegant. Unlike the stations, which are supposed to be “lanterns” at each end of the cable car, and to my mind irredeemably ugly.

Incidentally, the stations were built backwards – in that the cable car kit was installed on-site first, and then the building erected around them. The main engine room is on the north side, and there is just one engine powering the whole thing.

The piling for the station is equally deep. 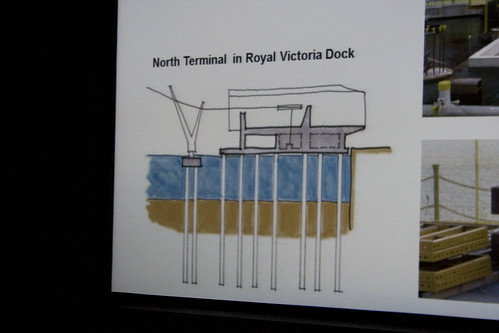 As we all know, they got there in the end, and opened in time for the Olympics which was never a contractual deadline, but let’s be honest, it was the real deadline.

The pylons are rated to last 60 years, and the cables for 20 years, subject to an annual inspection. They will test the cables by clamping an x-ray machine around the cable then just running the cable through it looking for any defects.

Since its launch, 140,000 passengers have used the cable car. Yes a lot of them will be “ohhh, new shiny thing” visitors and tourists, but we were assured there are some commuters using it as well.

They also have to carry out an annual emergency escape drill to rescue trapped passengers in a cable car pod high over the Thames. Annual you say? How do I get to be a “trapped passenger” for the next one I say! 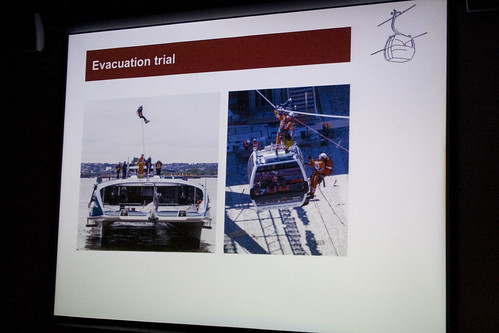