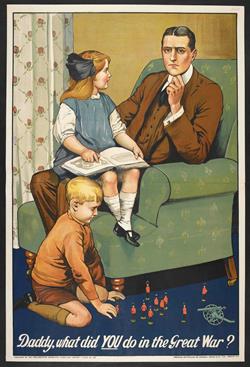 Starting with the posters, some of which are legendary. As willing volunteers dried up, guilt was used to encourage men to join the army.

“What did you do in the great war” is not just a poster, but a master piece of propaganda. If you don’t fight, you are letting the side down.

Likewise, as more men went off to fight, women were encouraged to swap the kitchen for the munitions factory or the farm. Often later portrayed as a liberating movement that let women out of the households, they were initially very much in support of the fighting men. Women still supporting husbands, even if the husband was no longer in the lounge, but on the western front.

Away from the state machinery of publicity though are the more humble objects from the people involved, such as letters, a handkerchief bearing lyrics for ‘It’s a Long, Long Way to Tipperary’, and schoolboy essays reacting to airship raids over London, or even a knitting pattern for balaclavas. 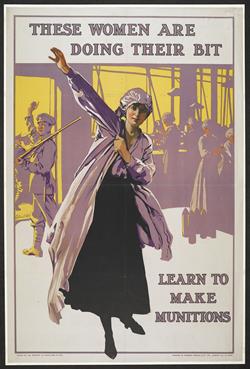 Also included in the exhibition on rare display is a letter from Isaac Rosenberg and the manuscripts of well-known war poets, such as Rupert Brooke.

As is often the case, when men are pushed into terrible situations, gallows humour rises to the top, and a lot of humourous documents are scattered around the display. Humour that more modern eyes might find distasteful, until they are pushed into a traumatic situation themselves, and find laughing the best cure.

It’s one of those exhibitions that is both a fascinating look at historical documents, but also an almost uncomfortable peeping into the private lives and concerns of people long dead, but still alive in their writings.

The exhibition is open in the British Library until the 12th October, and is free to visit.