Electricity gives the Wellcome Collection a Spark of Life

You’ve probably seen the black and white photo of a woman in futuristic hair-curlers promoting the Wellcome Collection’s exhibition about electricity, but its more than hair tongs and kettles that’s on display. 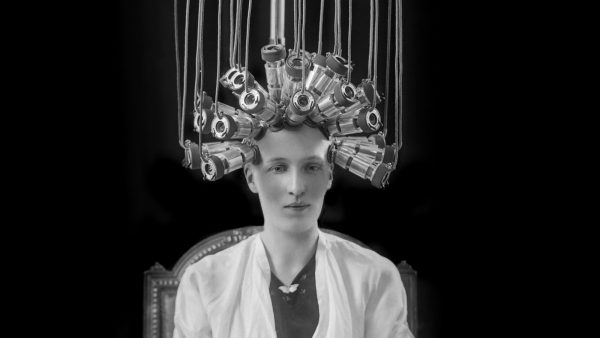 Electricity is a curious beast, a primeval force that is essential to life, it’s both silent and invisible, yet puts on dramatic visual displays in nature and the laboratory, it’s mysterious, but the modern world couldn’t exist without it.

It’s also a force that captures the imagination, from making dead frogs jump to bringing Dr Frankenstein’s monster to life. Massive electrical discharges in Victorian experiments reinforce the image of the mad-cap scientist bent on dominating the world.

The exhibition starts with a frog, one that wasn’t made to jump, but when rubbed with amber was used to generate sparks which were thought by ancient Romans to be beneficial to health.

Ancient folk knew of lightning, but thought it thunderbolts from the Gods. We still have lightning, but with around 8 million lightning strikes on earth each day, the Gods seem to be very angry.

Maybe they are annoyed that mankind started to investigate their primal power, with the exhibition showing early experiments in trying to capture electricity sparks and turn them into something more interesting that a visual wonder for funfairs and scientists.

It was the development of the batter, an early one is on show that proved electricity could be more than just a spark.

It’s here that electricity split its fortunes, on the one hand people working to harness this curious form of energy, and on the other the delve into the mystical when the famous frogs legs showed a link between electricity and life.

Were scientists trying to create electricity tampering with the very forces of life itself?

It’s this mystical power over life, to kill, but also to restore that so facinated authors and artists and is explored in the cultural aspect of the exhibition, which now rejoins the other strand, the science of electricity.

From early experiments in using it for communications, to the small local power companies that sprung up in major cities, then to one of the UK’s largest ever civilian construction projects – the National Grid.

It was this which was to turn a luxury belonging to the few into something that almost anyone could tap into. And with the supply of power came devices to make use of it.

Initially, mostly domestic, described as the silent servant for the busy housewife, it has been the automation of domestic chores that has revolutionised the lives of those who would have once taken the best part of a day just to keep the home clean.

Look for an early electric kettle, with its still just within living memory fabric covered electricity cable. And the kettle has become an icon of the UK’s electricity supply, with the Brits famous power surge when television shows end and we reach for a cuppa tea.

The exhibition looks at how the National Grid now managed those surges in demand, and a necessity which saw the UK’s power network install backups and systems to cope with the surge, and resulted in the UK’s supply becoming one of the most reliable in the world.

The exhibition is open daily except Mondays until 25th June at the Wellcome Collection. Entry is free.