London is packed full of various lumps of ancient Egypt cluttering up museums who by various means in the past acquired them, so another display in another museum might seem excessive. However, Egypt has also inspired architects, resulting in quite a lot of offices, factories, and even some grand mausoleums having a distinctly Egyptian feel to them

A new temporary display has been set up to show off these Egyptian relics that lie outside the museums. The display is inside a museum though, in the upper floors of the Wellington Arch.

The monumental arch was converted into a gallery space earlier this year, and also boasts one of London’s smallest specialist book shops.

Upstairs though, is a gallery with a number of paintings and photos of how London’s architecture was changed by the Egyptian mania.

I was particularly struck by a model of an unusual looking boat though. 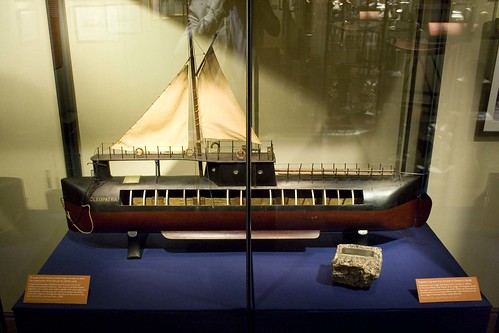 This submarine style vessel was a specially built construction to carry the incorrectly named Cleopatra’s needle to London. I knew the stone obelisk had a stormy trip to London on a boat, but I had always presumed it was just a normal cargo boat. Here was a model of a very unusual boat, which was constructed as a tube around the obelisk, and then when floated, the rest of the necessary apparatus added on top.

A photo shows the needle in its wooden harness as it was rotated to stand upright on London’s embankment, and looking very much like an early fairground ride. As an aside, the two replica sphinxes that sit either side of it on the Embankment face the wrong way. It looked better to the Victorians to have them face the obelisk, and to hell with historical accuracy!

Much of the rest of the exhibition is devoted to buildings erected, mainly in London and that contain definitive Egyptian styling to them. 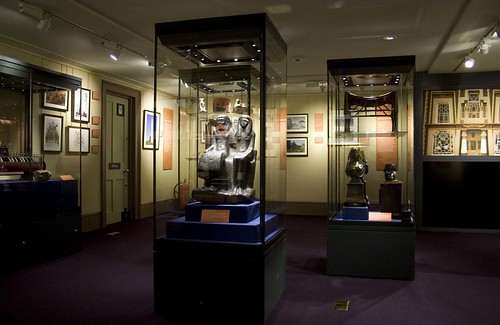 Obviously, the Carreras building is here, with a note about how the symbol above the main entrance was covered over during WW2 as it looked a bit too similar to the Nazi eagle for comfort. It’s never been restored.

The Carlton cinema in Upton Park looks too “disney” for my taste, but I was fascinated by an old photo of Richmond Avenue in Islington, which was originally lined with sphinxes, and many of which still remain. I must pay them a visit one day.

Near an old residence of mine is the more modern, and quite famous Homebase on Warwick Road with its Egyptian inspired freeze. Do look for the god who had his Ankh replaced with an Ankh and Decker drill. Typography geeks might love the fact that the names of the Gods written in English, are however written in a font called “Egyptian”.

A background sounds of Wilson, Keppel and Betty’s sand dance on a video screen is a reminder of the rather odd way people looked at Egypt in the past.

The exhibition is open until the 13th January. Take a notepad to scribble down inspiration for visits to places around London. Entry to the gallery is £4. Whilst visiting, the roof terraces are open (the doors are bit heavy, but do open) and there is a display on the 1st floor about the Arch itself.

If you like things ancient Egypt, and haven’t been, I would also strongly recommend a visit to the Petrie Museum.