An early drawing of Tower Bridge

The below drawing might not look that unusual, albeit fairly obviously from an older time when the riverside was still a major port and industrial centre, but at the time it was printed – in 1886 – it was quite radical.

The reason it stood out is that at the time, Tower Bridge didn’t exist!

The picture, taken from my collection of The Graphic newspaper of June 1886 is actually a representation of what the area will look like eventually, mainly to explain to a still sceptical public what the benefits of a bridge at this location would be. 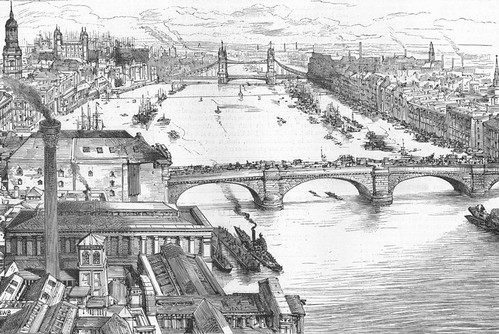 Means of Communication between the North and South sides of the Thames below London Bridge, showing the advantages afforded by the new bridge A. Thames Tunnel B. Tower Subway C. The New Tower Bridge

Notice the line marking the existence of the Tower Subway next to the future Tower Bridge, the earliest tube railway in London, pre-dating even the City & South London Railway (now the Northern Line) – although the railway component lasted just a couple of years, and it later became a pedestrian tunnel.

The use of the subway tunnel by pedestrians collapsed after Tower Bridge opened, and it was eventually sold as a mains water supply tunnel for hydraulic power to the City. It is still there, although now used to carry fibre-optic cables.