Published 19 June 2009 by By Ian Mansfield Events and Tours, History

If you came here looking for details about the sheep drive on Wed 21st Sept 2011, it’s been cancelled by the organisers. Sorry.

Fancy acting like a Freeman of the City of London and drive some sheep over London Bridge? Well, you can as it happens as London Bridge’s 800th Anniversary celebrations will include a sheep driving event – and even “ordinary” folk can apply to join in.

As the festival is part of the Lord Mayor’s Appeal – a charity – they are naturally expecting people to pay for the privilege. Unfortunately, it doesn’t sound cheap – being a traditional groat, which is the old name for four silver pennies. Four ordinary pennies I could afford, but silver ones sound a bit out of my budget.

Apart from the sheep driving, the whole bridge will be pedestrianised for the day, and a whole range of livery guilds will be there displaying their wares. If it is similar (and it sounds like it) to the street market held last year in Cheapside, then it should be a good bit of fun to wander along to watch the festivities. 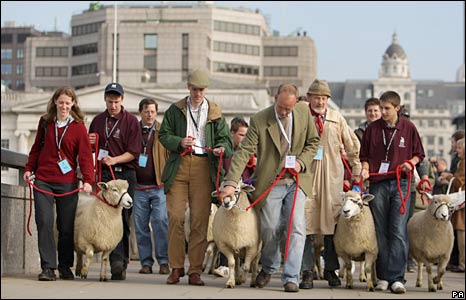 Frustratingly, according to Diamond Geezer’s chart, the Jubilee Line to London Bridge, won’t be working that weekend.

The Lord Mayor’s Appeal has a range of other events occurring this year, and while some of them do appeal to my tastes, they tend to scare my somewhat depleted wallet. Which is a shame.

Somewhat cheaper though is a rather nice idea – a collection of Trump Cards featuring “London’s Greatest Buildings”, and five packs will contain, Willy Wonka style, Golden Tickets to enjoy tea at Mansion House.

Slightly more bizarrely though, they are also offering jars of Mansion House Kumquat Preserve, stirred by the Lord Mayor himself. Being of a mischievous bent, I had evil thoughts to persuade a major supermarket to buy a few thousand jars. The Rumpelstiltskin-esque vision of the Lord Mayor having to stir every jar brings a smile to my perverted mind.

As a final comment, the story that you had to be a Freeman of the City to drive sheep across London Bridge is not entirely true. Like most stories though, it has a kernel of truth.

As it happened, anyone was able to drive sheep, or any animal (excepting fire breathing dragons) across London Bridge. However, London Bridge was a toll bridge and you had to pay a fee to take your animals across – unless you were a Freeman, in which case it was, self-evidently, free.

This made a big difference, as a Freeman would be able to sell his (or occasionally, her) cattle at the same price, but as they hadn’t paid the bridge toll, their profit margin would be higher. The commercial benefit was also one of the reasons why a person granted a Freedom had to pay a sizeable fine to the City Commissioners for the title.

Over time, the story built up that only Freemen could drive sheep over the Bridge – mainly as they were probably the only people to bother.

The tolls raised by that early London Bridge are still in use – as part of the Bridge House Trust, which to this very day continues to fund the maintenance of the Bridges across the river within the City boundries at no cost to the taxpayer.