For a couple of weeks, there’s a small exhibition of book cover artwork related to the Doctor Who books, which have been re-released by their publisher.

It’s very much a prints on wall sort of display, with a case containing the books themselves. The books were at one time, and in some cases, still, the only way to enjoy older episodes of Dr Who, as the original broadcast tapes were destroyed.

Some have been subsequently found, but the written word still often conveys more than the celluloid interpretation can ever achieve. So the books are back on sale. 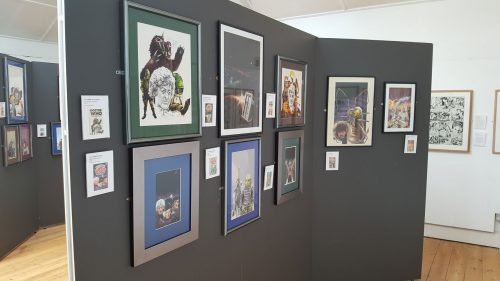 Featuring over 30 pieces, including the covers from six of the new reissues, this is the first time that the artwork has been publicly exhibited.

Considering that these are essentially, just blown up copies of the front covers of the books, what makes the display interesting is that the artwork lacks the clutter of the book titles — they are vast empty spaces with often isolated bubbles of characters floating in a void.

Once the book titles are added, the artwork is diminished to a mere adornment.

But on it’s own, several of these pieces could grace any art gallery, or home collection and not look out of place. 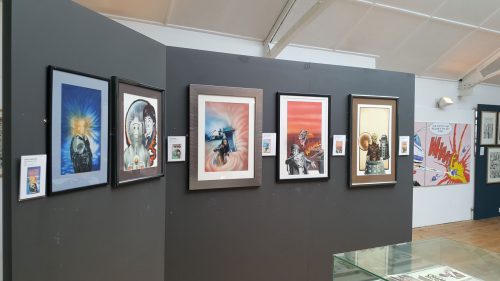 The exhibition will also include ten covers by Chris Achilleos from The Daleks through to Revenge of the Cybermen, five covers by Andrew Skilleter from Destiny of the Daleks through to The Mark of the Rani and other classic and well-loved original cover artwork such by Roy Knipe, Jeff Cummins, and David McAlister.

The display is only open until 15th May at the Cartoon Museum.

Entry to the whole museum is £7. 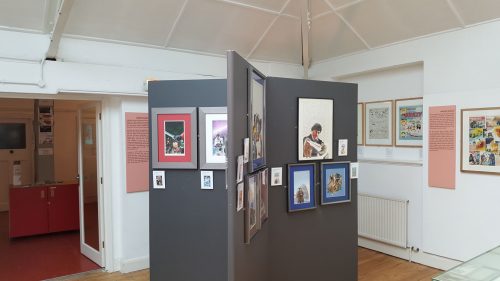 I have a bit of an issue with this museum. I should love it. It’s packed with a range of artwork that veers from historical prints to modern politics.

It should be ticking so many boxes for me that the National Society for the Preservation of Box Tickers would be offering me an honourary membership.

But, every time I go in, I come out feeling a bit “meh”. From the often rather desultory ticket salesperson, to the ever so slightly annoying minimum purchase on credit cards.

If you’ve been before, paying £7 for one small exhibition is a bit much, but when I asked about the cost of the friends membership, which would have included a year’s unlimited entry, the girl told me to open the leaflet and read it.

Hardly enthusing about the place.

I walked in, probably willing to pay the £25 so I can visit many times and come home to write about each small exhibition, but no, not this time.

If you’ve never been to the museum, then right now is as good a time as any to visit, but if you’ve been before, frankly, unless you are an ardent Dr Who fanatic, £7 is just too much for this modest little display.

The Dr Who Museum in East London is a better visit.