Imagine a fusion of Doctor Who’s famous villain, the Dalek and some of London’s more famous street icons, and you have a work of art by Stu MacKay.

For the past two years he has been painting very London-centric Daleks, and over the past month has been selling prints in Greenwich Market.

The first triptych are three famous icons of London’s streets, the phone box, the black cab and the double-decker bus.

The paintings have meanings behind them as well.

The telephone booth, talks about the phone-hacking scandal. The black cab has been rendered in blue, and the painting is based on an actual TX1 cab. The double-decker bus is also based on a real bus, this time, a No.11 Route-master bus in the London Transport Museum.

Another triptych features three of London’s landmarks that have been Dalekified — St Paul’s Cathedral, The Gherkin and Big Ben/Elizabeth Tower.

St Paul’s is probably more famous among Dr Who fans for its background staring role in the Cybermen invasion story, but Daleks also rolled over Westminster Bridge towards Parliament, and Big Ben once. 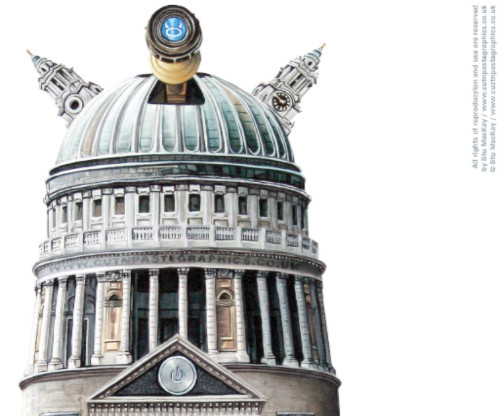 The third of the set is similar to the first, but more general, in that it’s emergency vehicles. A fourth set didn’t really work for me frankly.

I find that many markets have a lot of generic art, rip offs and clones, so it’s nice to see genuine original ideas at work. It’s likely that these will appeal to Londoners who love London and quite like Dr Who as well, or maybe the other way around.

The originals are for sale, to deep pocketed collectors, but much more affordable are the prints the artist has been selling in person at Greenwich Market, or you can buy them online.

NEWSLETTER
Tagged with: Doctor Who, greenwhich