Published 7 May 2010 by Events and Tours, Museums

Suggest an evening that involves wandering around an old fashioned museum with a glass of wine and I am probably already interested – but throw in allusions to Doctor Who and various other science fiction shows and we have a near certainty that I’ll want to turn up.

Simple idea – various aspects of how ancient Egypt was co-opted by sci-fi writers and used as props within their stories – demonstrated by suitable artefacts in the museum that were closely (or not) linked to the underlying story.

A DVD of the Pyramids of Mars was being played in one of the rooms, where incidentally they also show late-night horror films on occasions.

Although most of the “trail” was devoted to Dr Who, Stargate got mentions, as did various other sci-fi shows I am less familiar with.

The big surprise for me though was to learn that the helmets worn by pilots in the original version of Battlestar Galactica were directly modelled on the headdress worn by Egyptian Pharaohs, right down to a variation of the uraeus on the front. 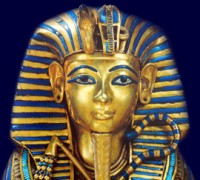 Overall, a very enjoyable hour in one of my personal favourite museums – and hopefully they will repeat the event (or similar) in the future.

Diamond Geezer also seems to be quite keen on the museum.

NEWSLETTER
Tagged with: Doctor Who, Petrie Museum of Egyptian Archaeology

1 Pings/Trackbacks for "Dr Who, Ancient Egyptians and a Glass of Wine"