Imagine a movie that seemingly fuses Tim Burton at his most surreal, Disney’s Fantasia and generic 1950s American “mom and apple pie” movies into one package, and you get Dr. Seuss‘ The 5,000 Fingers of Dr. T. 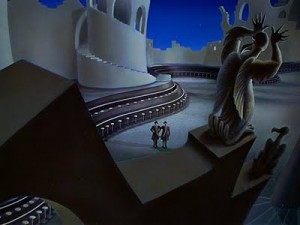 Last night I wandered over to the austere Photographer’s Gallery by Oxford Circus – a building that has taken the concept of white paint to its ultimate expression – for the phantasmagorial delight that was to be shown in their upstairs gallery.

The movie was made in 1953, and at its simplest is basically about a young boy who is forced to learn the piano against his will by a tyrannical tutor and has a tendency to daydream a lot. From the utopian 1950s household he is transported to a nightmare vision where a strange land is ruled by the aforementioned tutor who has a mad vision to collect 500 children (hence the 5,000 fingers of the title) who will play a gigantic piano for all time. Add in a widowed mum and a handsome manual labourer, who just happens to be a genius piano player and you have the genesis of the movie.

The movie is both brilliant, and awful in equal measures, but despite being commercial flop has become a cult classic. I was vaguely aware of the existence of the film, but had never seen it – and as part of an ongoing season, the gallery decided to have a small screening. 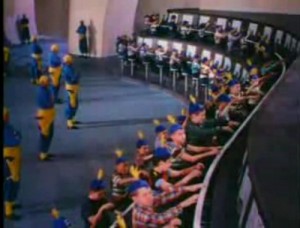 While the scenery is monstrous and exactly what you would expect from Dr Seuss, it is the secondary characters that make the movie for me. The guards all stomping around are of a somewhat larger than average build which just adds to the terror they cause a small child, but best are the “twins”, two old men who have a long beard that has grown between them to form a link and they travel around on rollerskates, almost as a single being.

The lower dungeons are dedicated to musicians who don’t play the piano as the tutor is determined to banish all other forms of music that exist. Here, grand musical dances occur – almost a Peter and the Wolf style demonstration of what each musical instrument can do, but distorted by Dr Suess’ vision.

I think that if this movie was made today, it could be a huge hit as people are used to movies such as A Nightmare Before Christmas and The Corpse Bride. It could even work as a stage musical. As it stands, it is an odd mixture of 1950s stage musical, and a modernish Tim Burton fantasy.

A slight twist at the end of the movie makes you question whether this was all just a dream!

The film is like marmite, either you’ll love it or you’ll hate it. Unlike marmite (blugh!), I loved this film.

The original film trailer is on the IMDB website.