If you are the sort of person who has large tax bills and also owns rather nice lumps of art or other “significant” objects, then the government is proposing let people donate that item to the Nation in exchange for a partial reduction in their tax bill.

A consultation has been launched – details here – and the amount of tax rebate allowed will be folded into the existing Conditional Exemption Tax Incentive scheme, so limited to the current £20 million per year.

What is the Conditional Exemption Tax Incentive though?

It’s a very little known tax scheme whereby a person can inherit something nice and offset the inheritance tax bill by making the item available to the public. However, most of the items thus set aside are not handed over to museums or galleries, but remain in the owner’s own home.

The key thing though – they must make that item available to be looked at if a member of the public asks. Sadly, I can’t just turn up on the doorstep and demand access, but reasonable efforts should be made to let me see something if I wanted to – otherwise they lose the tax benefit.

For example, the study for a drawing called Grey Tube Shelter in 1940 by Henry Moore is available to look at in someone’s private home, should you really need to see it up close.

I guess it is a nice scheme as someone inheriting lumps of art might have to sell them to pay the inheritance tax bill that was attached to the painting, and at least the item is enjoyed by someone in their home instead of being lost in an art gallery warehouse somewhere. 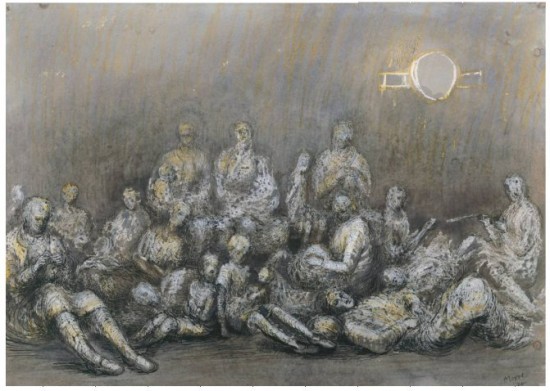 It’s not just Object D’Art or furniture though, even entire estates can be set aside, although they then tend to be opened to the public as a routine event – such as, surprisingly in London, Syon Park.

To carry out a search and see what is available, click here.

The new proposals though will only apply to items that can be moved – so not landed estates – and they have to be put on public display, not kept in someone’s private living room.