Does this 17th-century map show an early image of Father Christmas?

A rare map of the Arctic Ocean held at The National Archives may contain some of the earliest colour images ever produced of Father Christmas.

Found inside a volume of John Seller’s Atlas Maritimus, the custom-made chart dates from around 1675. Significantly this is also just a few years after the restoration of the Monarchy, and the overthrowing of the ban on Christmas that was introduced by the Puritans.

At the time also Father Christmas wasn’t seen as a gift-giving figure in the style of Santa Claus as we think of today, but as a personification of the Christmas festival, not dissimilar to John Bull or The Green Man, or for Americans, Uncle Sam.

Back to the map, and in the 17th century, as part of the bespoke production process, buyers could choose from a selection of maps for their own volume of an atlas showing seas and coasts then known around the world.

Hand-tinting, applied as an extra service, made each chart unique. Curiously, the particular choice of red colouring applied in this example may make it the first-ever map to depict Santa in his customary red clothing. On the right-hand side of the chart, in Novaya Zemlya, a sleigh crosses the snowy wastes pulled by reindeer with a red-coated driver; another image on the lower right shows a figure dressed in red and white, leaning on the scale bar as if chatting with the polar bear. 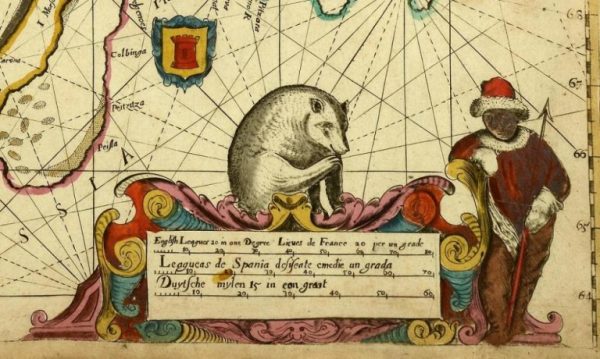 The icy waters shown on this ‘Chart of the Sea Coasts of Russia Lapland Finmarke Nova Zemla and Greenland’ lie to the extreme north of Europe, chiefly within the Arctic Circle. These are the ‘seas of the midnight sun’ where the sun shines day and night in the middle of the short summer. The lower edge of the chart shows the northern shores of Scandinavia at left – Norway and Lapland – on the White Sea, with Archangel in the centre lower edge, and the coastline then sweeps to the right across the top of north-west Russia to Novaya Zemlya.

This chart was not intended for navigation. It lacks information useful to mariners, such as soundings, warnings of rocks and sandbanks, and the locations of harbours. The space is filled instead with decorative details.

What is marked as Greenland at the top left of the whole chart is really its eastern neighbour, Spitsbergen. ‘Finmarke’ is part of modern Norway, ‘Corelia’ (Karelia) lies to the right of the prancing goat, while Lapland forms the ‘nose’ of the horse’s head shape.

Pictures of ships and a blowing whale at the top centre, plus compass roses, and ornate cartouches for title and scale, were designed to appeal to an expanding market for charts among the nobility and gentry of Europe.

For those with an interest in the origins of Christmas, however, it may chart the beginnings of what became the fable of Santa Claus. The red decorative details of the two figures dressed as Father Christmas are perhaps what brings a legend to life.