Yes he does as it happens.

As part of the media frenzy to launch his new book – which has previously included headline friendly comments about the existence of God – a cosmologist managed to fill the cavernous Royal Albert Hall to give a talk on science, and his life in general.

Stephen Hawking is probably the most famous living scientist in the world, although probably not for the technical details of his scientific work, than for being “that clever guy in a wheelchair with the funny voice”.

As a bit of a science nerd and long time fan of the glory days of BBC2’s Horizon – when they used to talk about actual science – this was an event that I was not going to miss. Even the £40 price wasn’t going to deter me!

As a lecture though, this was a very strange event, entirely due to Professor Hawking’s medical situation.

I have been to lots of lectures, and they are enlivened by a good speaker, or killed by a monotone, monotonous droning by a speaker. Last night, Stephen Hawking captured an audience for over an hour speaking the in the same robotic monotonous voice that normally sends me to sleep.

It’s possibly an interesting observation that a man who is famous for his speaking style is a person who hardly anyone alive today has ever heard speak with his own voice.

Last night was not a talk for scientists, but was an introduction to his life and works, and a quick trip into the concept of M-Theory, which is the main topic of his latest book, which was ideal for what we wanted.

Incidentally, if you ever get a chance to listen to him speak, sit to the left side of the hall. Otherwise, you get a good view of the back of his computer screen. Not that it makes any difference at all, as it isn’t as if he was winking conspiratorially to the other side of the hall – but well, because, you just want to see HIM.

From the story of how he yearned for an electric train set as a kid, to the disappointment when it didn’t work properly, to the troubles that “intellectuals” had in fitting in with a suspicious community, to the battles he had with his father over his preferred career. 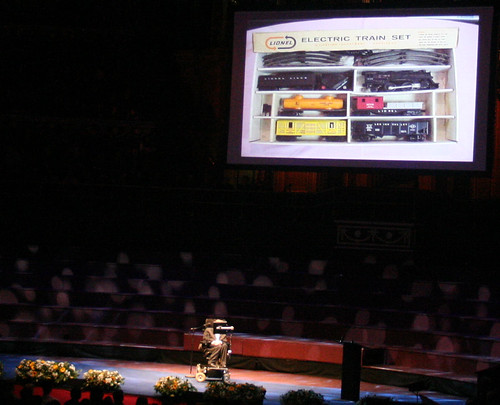 His father was fundamentally opposed to his interest in fundamental physics – thinking biology would offer better prospects. It is to cosmologies great gain that the father lost that one.

A run through his work at Cambridge and elsewhere and the people he has worked with – then three pre-arranged questions from Professor Jim Al-Khalili.

While his speech would have been pre-prepared, it was interesting that he still selected each section of text using his now iconic sensor and computer. I expect it would have been not just intolerably boring for him to just sit there for an hour-plus listening to a prepared speech, but also it would have been harder for the audience.

The lack of emotion in his robotic voice makes it quite difficult to listen to for an extended period of time, and the breaks at each paragraph where he selected the next section was quite useful.

You can also hear the beep, beep, beep, sussss sounds of his selecting text from his computer, which is oddly fascinating, although later realising you are being fascinated by a persons disability is a bit uncomfortable. 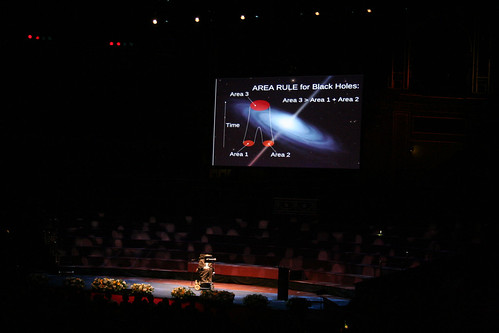 For me, this was about as close as I get to the experience that most other people get when they go to a pop concert in terms of the emotional impact. It was quite frankly, awesome to just be in the same auditorium as such an iconic figure.

The price was more than I would ever pay for a talk, but lectures by Stephen Hawking for the general public are incredibly rare – but that the price included a copy of his latest book made it easier for me to feel less guilty about the damage to my depleted wallet.

Just as a tube train leaving Wembley on a Saturday afternoon will be filled with people wearing tokens of allegiance to a specific football team, last night trains from South Kensington were filled with people excitedly clutching a book about physics and sharing that silent smile of a shared experience.

A delightfully surreal end to one of those genuinely rare “once in a lifetime” events. 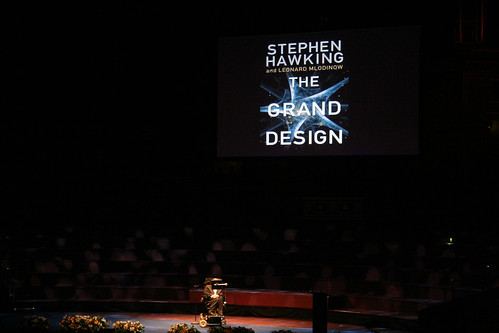 1 Pings/Trackbacks for "Does Stephen Hawking Dream of Electric Trains?"