The display space inside the architectural head office for RIBA has been given over to to the notion of perspective.

As their blurb says: “Perspective drawing has been applied to the art of building for centuries and used as a tool to evoke illusory architectural spaces: a way of seeing which became a way of building. By translating three-dimensional space onto a two-dimensional surface, it has become the ultimate quest to depict realistic impressions of a complex world.”

RIBA have given over the exhibition space to Sam Jacob Studio who have in some modest way laid out the design of the room to slightly disorient you with angles and mirrors. 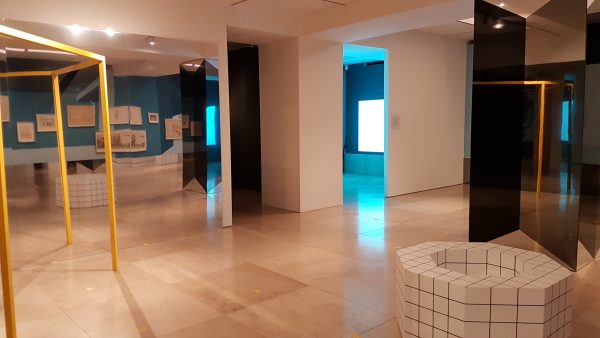 Each of the drawings have been placed at odd heights because the perspective lines of one align with the angles shown in another.

It’s sort of obvious when you know what to look for, but the display would have strongly benefited from some thin lines on the walls showing the perspective angles rather than hiding them away in the booklet. Anyone who doesn’t pick up the booklet will miss out on a major aspect of the display.

It does however leave you wondering if the drawings were chosen for their own inherent quality, or to fit into an otherwise unseen pattern on the walls. A tower block by Erno Goldfinger sitting uncomfortably next to a drawing of the Old Royal Naval College — on fire no less. 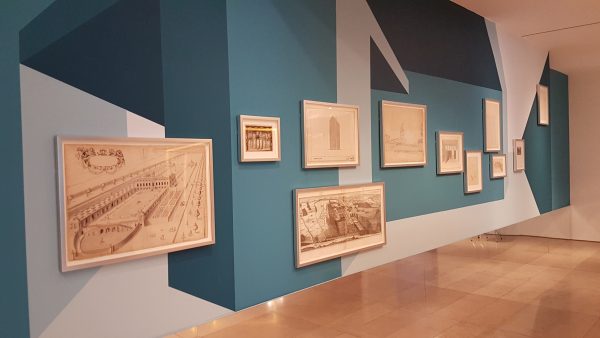 An odd video box is also here, with a slightly 2001 style video, and some rather fine historical books sitting in space-age style cases can be found around the corner. 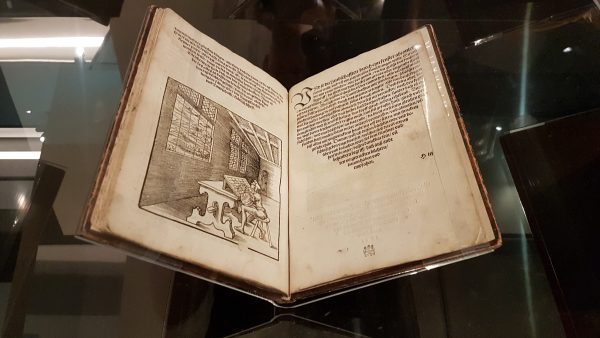 It’s an interesting display that’s worth popping into if in the area, but a struggle to recommend it for a special visit.

The exhibition, Disappear Here is open Mon-Sat 10am to 5pm, with lates to 8pm on Tuesday. It’s free to visit and open until 7th October.