Dan Cruickshank on the changes in Spitalfields

Published 3 July 2011 by Events and Tours

Back to the Bishopsgate Institute yesterday afternoon for the highlight of the events to mark the restoration of their Great Hall, a talk by the softly spoken mutterer of gollies and goshes, Dan Cruickshank.

Although he then didn’t say golly or gosh once during his talk – which would have spoilt my drinking game had I been watching him on a TV documentary. 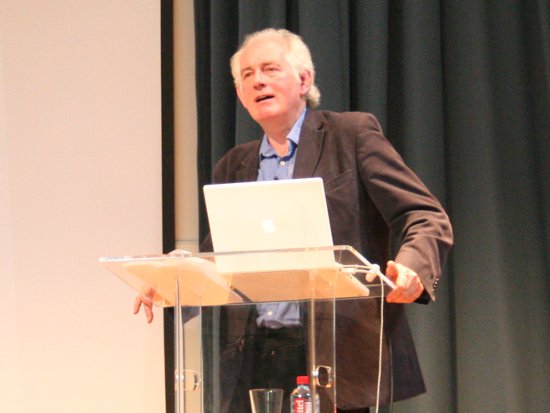 After a rambling start where he worried about the legacy of the Olympic Park, and the unrealistically named “Olympic Village”, which is made up of tower blocks and is not at all villagey in appearance, he pulled out some of the photos he had taken since moving to the area in 1977 and showed how they compared to the area today.

The rest of the talk was part lament about the lost past and part concern about the future, especially the highly controversial Bishopsgate Goods Yard development (controversial if you live in the area) which plans to extend the skyscraper clusters of the City towards Shoreditch.

I personally do not intrinsically object to tall glass towers sitting next to old buildings, but they have to be very good glass towers. An old church next to “the gherkin” is to my mind, actually enhanced by the tall glass tower behind it, while One New Change next to St Paul’s Cathedral is appallingly awful. The glassy edifices being proposed for Shoreditch however seem to lack a certain something, and are – possibly in homage to the long thin properties that used to inhabit the land – are often tall long and thin. The downside is that you have a very messy skyline – whereas larger monolithic blocks would have probably been better to act as a background to the Georgian houses.

I hadn’t really thought about it, but it seems that the weirdly brutal concrete box that Shoreditch High Street station sits inside shouldn’t really be seen, as it will eventually be surrounded by tall towers. In theory. So that view of the train station will vanish forever once construction starts.

He made a few comments about buildings that I noted for later investigation, including a few references to Jack the Ripper, an oddly popular local tourist attraction. I wonder if there will be “Dr Harold Shipman walks” around the areas where he lived in the future?

Like many talks I have been to, it is often the end questions that either act as a final pleasant icing on the cake, or have me chewing my arm off in frustration.

While Dan had gently chided history for its focus on demolishing old buildings in favour of modern towers and council blocks, some of the questioners were rather more shrill – especially a woman who is probably a fully paid-up member of the “we hate banks” brigade.

The main problem – apart from her rudeness in chiding Dan for interrupting her – was the total absence of any intellectual argument. All she delivered was a tedious monologue about the evils of capitalist buildings. Yawn.

A couple of commentators regretted the way that former slum housing was being gentrified, while the former occupants are housed in modern-day slums, the council block. I have sympathy with the opinion, but where a modern family lives alone in a small Georgian house, we have to remember that as a slum it housed 3-4 families.

The new occupant has to be able to offset the rent of four families, which is partly why they are only occupied by richer people.

The big worry right now though is that there are still a few really old buildings left in the area, especially a couple of Huguenots weaving houses, but many of them are run down and neglected, so hard to argue that they should be saved when the average person walking past will see a “retail slum” instead of a quite interesting building. There is limited time to save these remaining relics, but again, commerce means that if they are to be saved, then someone has to be able to afford to restore them.

While English Heritage are apparently rather indifferent to them, I am sure that as soon as someone buys one to restore, they will be all over the building, wrapping it up in red planning tape and demanding all sorts of expensive actions – all to be paid for by the new building owner.

While we have a system where anyone who owns an old property can be ordered around by English Heritage, seemingly at a whim, then many people will steer clear of old buildings. And they will continue to rot away.

I hardly expect the taxpayer to subsidise restoration works on private properties, but I get the feeling that the pendulum has also swung too far away from the rights of the property owner to maintain their own home as they want, and can afford.

It was an interesting talk, even without the expected goshes and gollies, and my notepad contains inspiration for further blog posts, which is always a nice way to end a lecture.