Long term readers may recall my on/off researches into a tube railway that would have linked Waterloo Station to Whitehall, that would have been powered by air-pressure “blowing” carriages down the tube.

That was just one version of so-called atmospheric railway, and a more popular concept was to have conventional trains on rails, and have a high pressure tube on the ground and push the trains along by a piston within the tube connected to the carriages.

Quite a few experiments and fully functioning lines were built – most famously near Exeter – but also at Croydon in South London. Although ultimately a failure due to the difficulty of maintaining a high pressure in the tubes with the ever complex valves requiring unaffordable levels of maintenance. However, the idea of a train without the need for a noisy and smelly locomotive engine up front would have been as amazing to the Victorians as the first satellite in space was for modern readers.

Below is another of my occasional excerpts from the Illustrated London News, which ran a series of news articles about the Atmospheric railways. This one focuses on the Croydon railway.

The railway described below was an “upgrade” to the existing conventional railway and was applied in 1844. Two pumping stations were built at Portland Road, West Croydon and Dartmouth Road in Forest Hill, and a picture of the Croydon building is included.

The works also included the world’s first railway flyover, at the north end of Portland Road, and that is the large image below.

The experiment was abandoned in 1847, and the Forest Hill building demolished. The Croydon building was relocated to Surrey Street for the steam powered waterworks, and apparently is still there.

Click on images for larger versions – sorry about the distracting background images/text on the pictures, the ink comes from the page opposite thanks to the newspaper being closed and unread for the best part of a 150 years!

We resume our illustrations of the various methods of Atmospheric Traction with that invented by Messrs. Clegg and Samuda, which may be thus generally described.

A large tube is laid down in the centre of a line of rails. This tube has an opening at the top, which is closed by a valve, formed of a leather strap, covered with short plates of iron above and below. Now, the strap being broader than the plates, it is pressed against the top of the pipe by a succession of long rods, screwed down with hook bolts, and thus forming a hinge. On the side on which the valve opens is a groove, which is filled with a composition of wax and tallow. It is evident that when the valve is raised, there will be space enough for a bent plate of iron to pass into the tube. 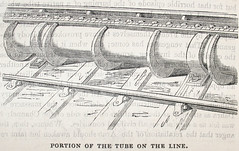 Engines, working large air-pumps, are stationed at intervals of three miles along the line, by means of which the pipe is exhausted of its air. When it is done, the pressure of the atmosphere on the back of the piston is the power to draw the train. It will be observed that, as the train progresses, (the wheels on the piston-rod raising the valve), there is an opening equal to the area of the pipe, at which the air can rush in, directly on to the back of the piston.

When the piston has passed, and allowed the valve to fall into its place, a wheel, attached to one of the carriages, presses it down; after which, a copper bar is drawn along the groove, to force the composition against the edge of the valve, and so exclude the external atmosphere. This bar is heated, to prevent the composition adhering to it. The pipe is then ready to be exhausted for another train. 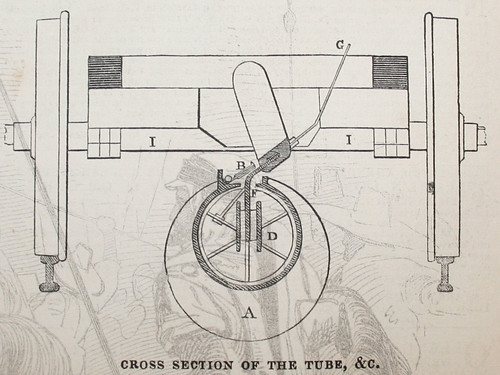 The Atmospheric Railway was first experimented, some years since, at Wormholt Scrubbs, where a line of three quarters of a mile in length was laid down, at the expense of the Patentees. The success of the experiments on this line, in spite of the novelty of the invention, and consequent inferiority of the apparatus, was so decided, as to induce the Dublin and Kingstown Railway Company at once to employ the Atmospheric principle on that part of their line between Kingstown and Dalkey – where it continues to answer the high expectations formed of it. (See Engravings of this Line at page 16 of Vol. IV of our Journal.) The Croydon, South Devon, and Paris and St. Germain Companies have since employed this system. 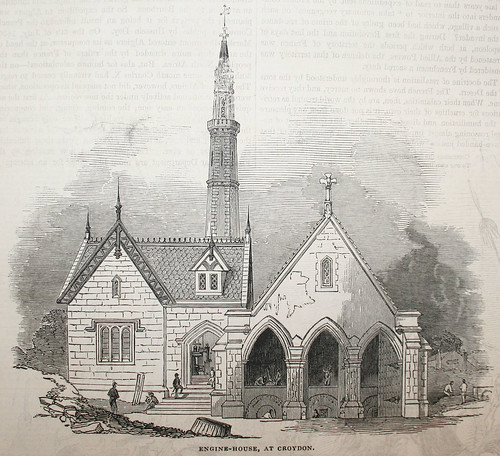 Five miles in length of the Croydon Line are now completed, and trial trips have been made thereon. Upon one occasion, with a train of twelve carriages, a speed of seventy five per hour was obtained.

The size of the tube used at Wormholt Scrubbs was nine inches, internal diameter: that of the tubes at Croydon and Dalkey is fifteen inches.

Several experimental trips have already been made upon the Croydon line. The following are a few of the results:-

The question as to the power of ascending inclines has been completely set at rest by an experimentum crucis. A train was brought to the foot of an incline of 1 in 50, and stopped, so as to deprive it of any power it might have acquired from the impetus of its previous progression. It was then propelled by the atmosphere up the incline, and that which many of our most eminent engineers have declared an impossibility, was accomplished with the greatest ease imaginable. Among other results that have been obtained, we may mention, that the five miles length of tube has been exhausted in its whole extent, the barometer being at the time at 27¼, and that the piston has traversed its whole length.