The building site next to Farringdon Station is to be turned into an office block once Crossrail vacate it later this year.

It’s been announced that the scheme, which was originally approved back in 2013 has now been handed to HB Reavis to build the 138,000 sq ft (Gross Leasable Area) mixed-use scheme. 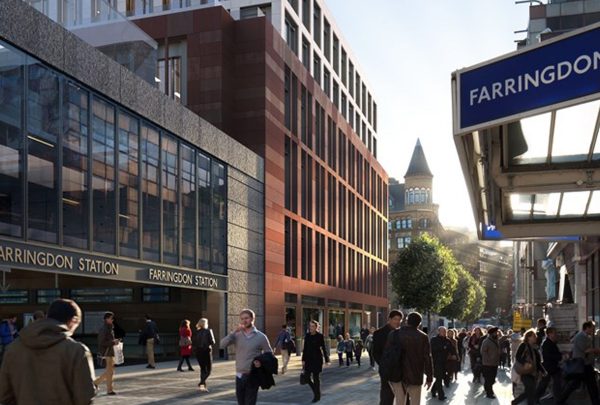 It’ll sit next to the Elizabeth line and Thameslink entrances to Farringdon Station, with ground-floor shopping and seven storeys of office space above. The original planning application filed in 2012 was rejected by Islington Council, citing concerns about the scale of the proposed development.

Sent back for revision, the upper two floors were stepped back away from the street so that the height of the building, from street level, would appear lower. This also expanded the size of the roof terrace area for office users.

It is possibly a slight irony that the new building is smaller than the 12-storey high, and ghastly Cardinal Tower that used to sit on the site now being developed.

Although the new block is substantially lower, it is only slightly smaller in terms of office space being provided.

The revised scheme was approved in December 2013.

Construction above Farringdon station is expected to start later this year. 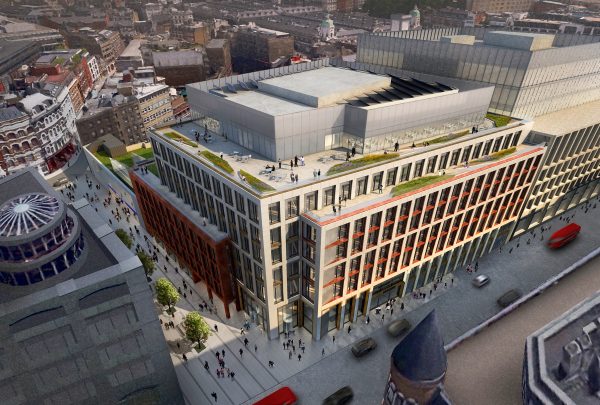 Plans are in place for 12 major developments over and around the new Elizabeth line stations and construction sites. The developments are expected to raise £500 million which is used in part to cover the cost of constructing Crossrail.