Crossrail extension to Ebbsfleet gets support from government body

Before it’s even finished, Crossrail could be in line for its third extension, this time out to Ebbsfleet in Kent.

In a report, the Thames Estuary 2050 Growth Commission — appointed by Government to direct investment in the Thames Estuary — has highlighted the Crossrail to Ebbsfleet extension as a top priority that should be delivered by 2029.

The report calls on the government to provide around £20m to enable the detailed engineering, design, land and financial modelling and legal framework to be progressed.

The government is already said to be warm to the idea of backing the extension to support new housing and jobs in South East London and North Kent, and to connect the Crossrail network to HS1 destinations across Kent.

It is expected that funding to support C2E may form part of a future Thames Estuary Growth and Infrastructure deal in the Autumn.

The early plans for Crossrail had included running the line out towards Gravesend, but this was cut back in the 1990s, and a review in 2004 recommended stopping at Abbey Wood. When Crossrail got approval in 2008, it was difficult to support the extended line. However, some passive provision was included in the station design at Abbey Wood to permit an extension to be added on later.

A Safeguarding Direction is also in place for an extension between Abbey Wood and Hoo Junction following the existing alignment of the North Kent railway lines.

If approved, this would be the third extension of the Crossrail line, following the extension to Reading and Heathrow’s Terminal 5.

In the latest transport strategy, the Mayor of London supported the extension in principle, but noted that London wouldn’t be providing any additional funding for it. 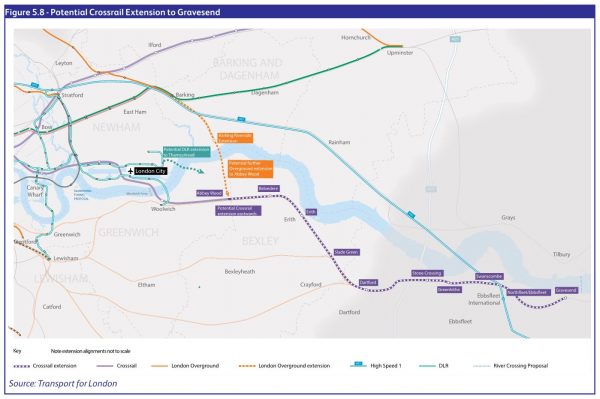 The Crossrail to Ebbsfleet (C2E) campaign has previously looked at how the extension could be paid for, and expects that up to half the cost could come from local sources, thanks to regeneration and new housing developments.

The funding is thanks to the fact that the C2E route directly connects three major regeneration areas: Bexley Riverside, Dartford Town Centre and Ebbsfleet Garden City.

It’s estimated that the regeneration of 8km of Thames riverfront would result in some 30,000 additional houses being built, and the line of the C2E proposal would support around 55,000 homes in total.

It’s also been noted that the connection at Ebbsfleet would enable the Elizabeth line, as it will be then, to connect with Eurostar services to mainland Europe.

In related news, as the report looks to 2050 for its remit, it also took submissions suggesting the possible eastern spur for Crossrail 2 could be extended from Hackney through Barking, Dagenham and southern Essex, and could even link up with Crossrail 1 via a Thames tunnel.

And, Crossrail 3 gets a very, very, brief mention in the Technical Report Appendix.