Crossrail has announced that a critical dive-under section of railway track just outside Paddington station has been structurally completed, and is on schedule to open early next year.

The new dive-under will allow Paddington-bound Elizabeth line services to pass underneath the slower freight trains.

The construction of the dive-under has been prompted by the Crossrail project, but should benefit all users of the railway line as it removes an annoying bottleneck along that section of railway. 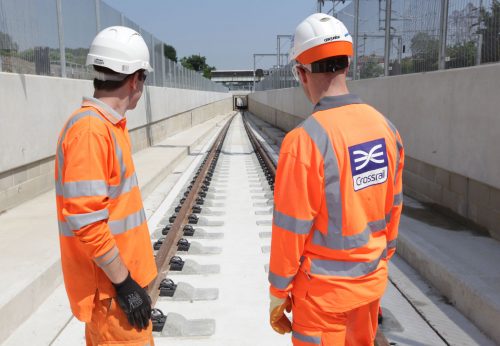 Construction of the dive-under began in October 2013. More than 34,000 tonnes of earth were excavated from the 5-metre wide site that is surrounded by the operational railway, with freight trains passing on one side and passenger trains on the other. More than 1,400 piled foundations have been installed and construction has involved nearly 40,000 tonnes of concrete and the installation of 730 metres of track.

Electric overhead wires to power trains and signals to control them will now be installed before the first test trains use the dive-under at the end of this year.

An article about a previous visit to the site back in December 2015 is here.

Matthew Steele, Crossrail Programme Director at Network Rail said: “This is another great achievement as part of Network Rail’s work on the Crossrail programme. Constructing the dive-under while trains continued to operate on either side of the worksite has been a massive engineering challenge. We will now work to ensure that the final elements of the dive-under are put into place so that trains can begin to use it from the start of 2017.”