A plot of land in East London that’s currently a Crossrail building site has been earmarked as a site for 1,500 new homes.

According to the Mayor of London, 600 of the new homes will be “genuinely affordable”, although how that differs from plain “affordable” was not made clear. The government definition of affordable housing states it must be provided at a level at which the mortgage payments on the property should be more than would be paid in rent on council housing, but below market levels.

It was also pointed out by Sian Berry AM, Chair of the Housing Committee that “The fact that only 40 per cent of the homes proposed today will be affordable is sadly unambitious – this is public land and the Mayor’s own target is actually 50 per cent affordable.”

Transport for London (TfL) is now seeking a partner to develop the Limmo Peninsula site, which sits next to Canning Town tube and DLR station.

The development will be residential-led, creating a new neighbourhood next to the River Lea. TfL expects to be in a position to announce a preferred partner later this year to form a joint venture partnership to develop the site. 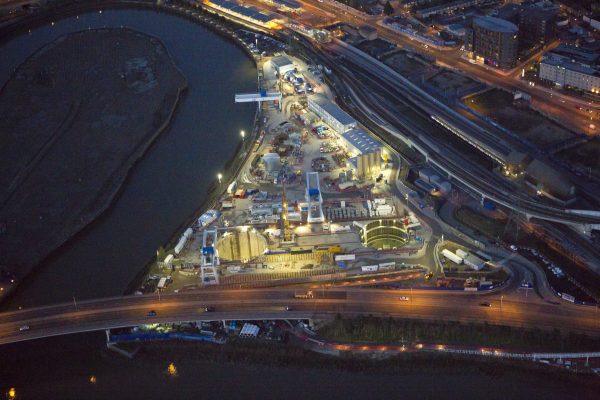 The Limmo Peninsula is a major Crossrail building site, and was where the tunnel boring machines were launched from to dig into central London. Two deep shafts were dug down to the tunnels, and one will be left, to act as ventilation and emergency access.

At the height of the London docks, this was a site for the Thames Ironworks, one of the major shipbuilders in the UK. West Ham football club can also trace its existence to this shipyard. Indeed, the football club’s coat of arms is two crossed hammers, after the hammers used to smash rivets on the ships.

Maybe that will make the new blocks of flats particularly appealing to West Ham supporters.