If you liked that, click here to reload it.

Yes, Tuesday 24th May 2022 will go down in transport history as the day that the Elizabeth line opens to the paying public, slashing journey times across London and adding a massive 10 per cent to central London’s tube train capacity. The opening will be the first stage of opening up the core tunnels, with trains running every 5 minutes between Abbey Wood and Paddington station.

The existing TfL Rail services that run between Paddington and Heathrow/Reading, and between Liverpool Street and Shenfield will continue as they already do but will be rebranded as Elizabeth line trains from Tuesday 24th May.

So in effect, there will be three separate Elizabeth line services.

As people will have been noticing, lots of Elizabeth line signs have been appearing over the past few weeks around London as TfL ramps up the work to the opening date, getting everything ready for the grand opening day.

Andy Byford, Transport for London’s Commissioner, said: “I am delighted that we can now announce a date for the opening of the Elizabeth line in May. We are using these final few weeks to continue to build up reliability on the railway and get the Elizabeth line ready to welcome customers. The opening day is set to be a truly historic moment for the capital and the UK, and we look forward to showcasing a simply stunning addition to our network.”

So from the morning of 24th May 2022, people will finally, after delays and cost overruns be able to use Elizabeth line trains between Abbey Wood and Paddington, calling at the new stations and platforms that have been built at Woolwich, Custom House, Canary Wharf, Whitechapel, Liverpool Street, Farringdon, Tottenham Court Road, Bond Street and Paddington.

Bond Street station won’t be opening with the rest of the line, as it still needs about three months more work, so is expected to open in the autumn.

Also, the line still has work to be carried out, so services between Paddington to Abbey Wood will close early in the evenings, running from 06:30am to 11pm, and the line will be closed on Sundays. Work will continue in engineering hours and on Sundays to allow a series of testing and software updates in preparation for more intensive services from the autumn. Although closed on Sundays, there will be a special service on Sunday 5th June for the Platinum Jubilee weekend, with trains running from 8am to 10pm on that Sunday.

The existing TfL Rail branded bit of the Elizabeth line will remain open on Sundays as they already do.

Later this year, also expected to be the autumn, the three services will come together and enables services from Reading and Heathrow through to Abbey Wood and from Shenfield through to Paddington. That will see trains every 2.5 minutes running through the central section of the line.

The final phase for the Elizabeth line is due by May 2023, but possibly sooner and will link up the final parts, allowing trains from Shenfield to run all the way to Reading and Heathrow.

But, on the morning of Tuesday 24th May, expect thousands of smiling transport fans, commuters trying out a new route to work and curious Londoners to be exploring the new purple line running through central London.

It’s been a long route to completion… 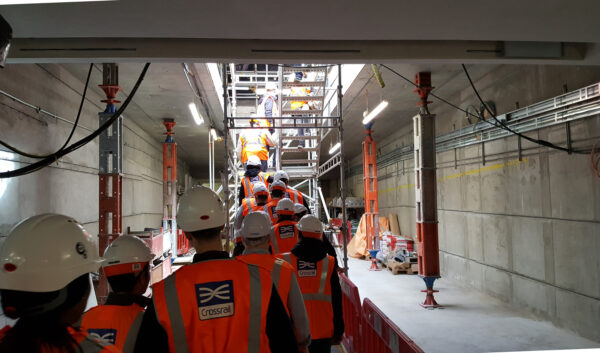