If you head over to the City of London’s library next to the Guildhall, there you will find a small display detailing some of the history of one of the City’s livery guilds – which sports the motto: Crecy, Poitiers, Agincourt.

You might have guessed from the names cited, that this is a guild with close connections to combat, and indeed it is – the longbow makers. Officially the Worshipful Company of Bowyers, and they have put a few of their company archives on display for the first time.

A rare display in fact as the guild, despite its great antiquity and former wealth, doesn’t have a grand livery hall in the city to show off. So most of the artefacts are locked away in an archive.

As an organisation that can be dated to at least 1363, they used to have a Livery Hall – until the Great Fire of London destroyed it in 1666, and for some reason they chose not to replace it.

The affairs of the company is still governed by a charter granted in 1621, and renewed in 1666.

The motto: Crecy, Poitiers, Agincourt was added at an unknown date, but reflects the importance of the longbow during those battles. You can expect to see more of the Company in a couple of years’ time – as 2015 marks the 600th anniversary of the Battle of Agincourt.

The display itself is a couple of glass cases with ancient documents and some relics on display. Just one bow is here, as this is a display about the company, not the wares it produced. 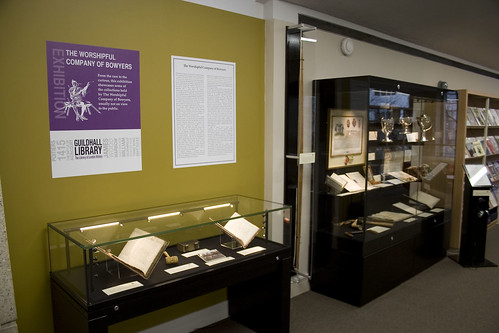 Some documents relate to a Rev’d Dr John Hussey, who is described as being in the “fine tradition of eccentric Anglican clergy”, and in addition to being a vicar and a longbow man, he spent prodigiously on astronomy equipment. He is sometimes described as being the first person to predict the existence of the planet Neptune. 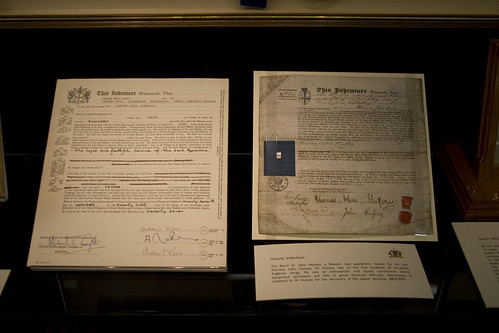 Do look for the Anne Boleyn Box, a small replica of an arrow storage box, which rumour has it the decapitated body of the unfortunate Queen was stored. The box is the trophy awarded during a shooting contest held in the Tower of London in July each year. 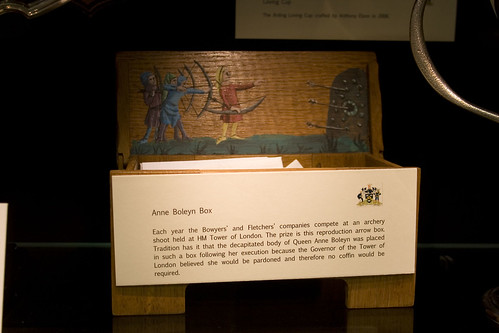 As someone who sometimes has to struggle with ribbon tied documents when researching bits of history, the “surrender bundle” sent a slight shudder of apprehension through me. The surrender in this case being the result of a dispute between the King and the City. 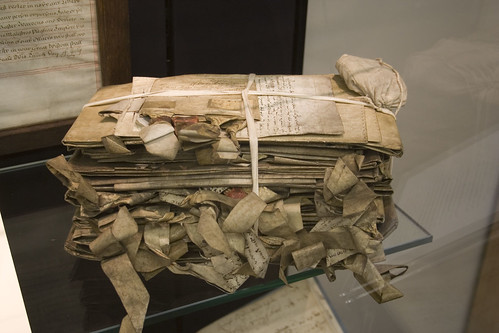 It’s a modest but interesting exhibition, and worth paying a visit to if in the area as it is rare for these documents to be on public display.

The exhibition is open Mon-Sat 9:3am-5pm until the 28th March. It’s inside the Guildhall library, so entry is obviously free.