A couple of years ago, plans were shown off for trains with inflatable seats. Today, it’s all over the news for some reason.

The Air Train concept was created by the Japanese architectural design firm Nikken Sekkei and the engineering firm Arup back in 2014 as part of a wider call for concepts that could be part of a next-generation train. 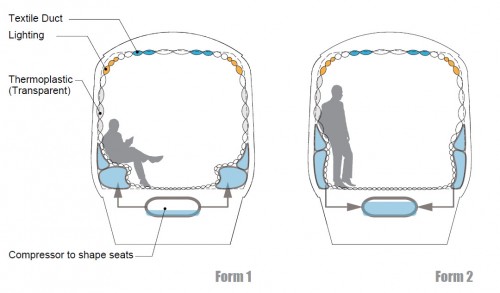 In essence, it’s no different from replacing fixed seating with fold-up seats — but in a way that makes the seats inoperable during rush-hours.

But rather than design lockable fold-up seats, Arap covered the entire train in rubber and then made the seats inflate when needed. They claim that this can release 40% extra capacity in the carriage during rush hours.

Unsurprisingly, it wasn’t shortlisted for further development, so, no, the news reports are wrong to say this is a possible future of train interiors. 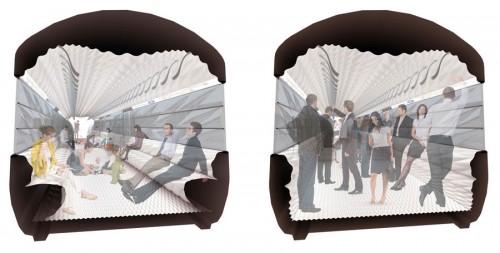 Not just because the idea is frankly, bonkers — but the public want to sit down on seats — and forcing them to stand would have caused a most unpleasant reaction, even on short commuter hops, let along longer journeys.

The call for improvements to the design of train interiors though, bouncy castles aside, was a serious one, and a number of concepts were suggested.

Most of them worked on how to fit more seating into trains, or to make the seating options more flexible to avoid space wastage.

Long term, the issue is about reducing the space taken up by the fabric of the train shell, so that more space can be extracted from of the carriage to allow more seats to be provided.

Which is in part why double-decker trains are being looked at again.

But not inflatable rubber seating.