Climbing up the Limehouse Accumulator Tower

Published 1 October 2010 by Events and Tours

If you use the Docklands Light Railway, you might have noticed a rather strange octagonal tower near Limehouse that seems to be sitting in an abandoned patch of waste-land. 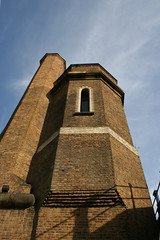 This tower, built in 1869 conceals a hydraulic accumulator that was originally used to raise the lock gates and power the coal lifting cranes. Restored in the 1980s by the Docklands Development Corporation it is now a tourist attraction – albeit one that is only open to the public during the Open House London weekend.

Once you find your way to the tower via a normally closed gate and join the queue, there is a chance to see some of the underground plumbing that took hydraulic power from the tower to the long vanished cranes that lined the nearby dock.

Also long since vanished is the engine room that would have stood next to the tower. 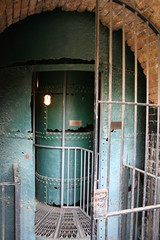 The way the system worked is that the engine room would slowly push a huge weight up the tower, and hold it there. Water was then pumped under pressure into the mains supply, but when demand exceeded that which the pumping station could meet, then the weight was drop down and add to the pressure in the supply.

Tower Bridge’s hydraulics to lift the roadways was based on a similar principle.

As you go in to the tower, you can see the remains of the massive round iron tube that would have originally been filled with 100 tonnes of gravel and pig iron. Around this now, a set of stairs runs up around the weight to a middle floor.

A modern wooden floor then leads you into the former chimney, where you can continue the climb up to the top of the main tower and here you get some quite good views of the Docklands Railway running past the tower, as well as parts of the city and docklands in the distance. 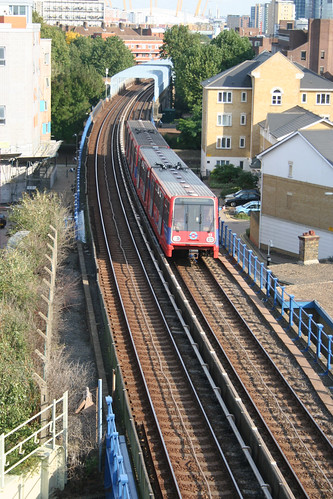 Note: I visited the tower a couple of years ago, and completely forgot to write about it at the time. Opps!