Published 12 October 2010 by By Ian Mansfield Events and Tours

This Sunday marks the 350th anniversary of the Nine Regicides.

The Nine Regicides, or to put it another way, the week that nine men were executed by the gruesome method of being hanged, drawn and quartered.

They were nine of the 59 Commissioners who signed the Death Warrant for King Charles I in 1649. After the restoration of the monarchy in 1660, a law was passed that limited reprisals against the former Republic to those who had officiated in the regicide of King Charles I.

The bill was passed in August 1660 and the first of a series of executions took place on 13th October 1660 and continued until the 19th October.

This Sunday, to mark the anniversary of this gory event, the Roundhead Association will lead a march and parade along The Mall and to Horseguards Parade in memory of the dead Commissioners.

It should be quite a sight to watch.

A similar event takes place annually in January – but organised by their opposing team at the English Civil War Society. 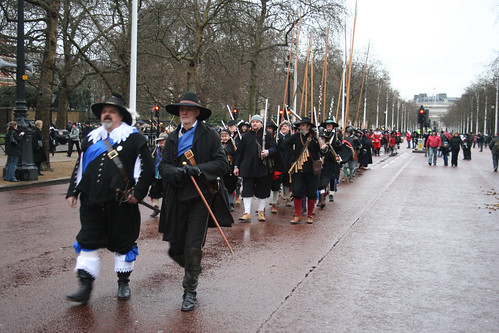 The English Civil War Society march down The Mall

Incidentally, the Indemnity and Oblivion Act of 1660 was repealed in 1948.

The Event Details on Sunday:

The Roundhead Association will mark the anniversary of the regicides by marking the route Charles I took to his death in Whitehall. This is a special one off event and is a privilege afforded by the Royal Parks Department.

The March will assemble on The Mall (probably by St James) from 10:45 with the event commencing at 11:25 with a Cavalry Parade along the length of the column followed by a General Salute. At 11:30 the March will commence along The Mall then along Horse Guards Approach Road and onto Horse Guards Parade where the March will form up for the Parade Ceremony including award and promotion presentations.

At 12:20 following the Ceremony the March will proceed back to The Mall and form up at Admiralty Arch whilst a small separate ceremony takes place where a Wreath will be laid before the statue of King Charles I located at the Whitehall corner of Trafalgar Square.

At 12:45 the Army will then march back to the Assembly Area on The Mall where the cavalry will again Parade before the final general salute.

The executions themselves took place in two locations:

On Saturday the 13th of October 1660, betwixt nine and ten of the clock in the Morning, Mr. Tho. Harrison, or, Major General Harrison, according to this sentence, was upon a Hurdle drawn from Newgate to the place called Charing-Cross; where within certain Rails lately there made, a Gibbet was erected, and he hanged with his face looking towards the Banqueting-house at Whitehall, (the place where our late Sovereign of eternal memory was sacrificed) being half dead, he was cut down by the common Executioner, his Privy Members cut off before his eyes, his Bowels burned, his Head severed from his Body, and his Body divided into Quarters, which were returned back to Newgate upon the same Hurdle that carried it. His Head is since set on a Pole on the top of the South-East end of Westminster-Hall, looking towards London. The Quarters of his Body are in like manner exposed upon some of the City Gates.

Monday following, being the fifteenth of October, about the same hour, Mr. John Carew was carried in the like manner to the same place of Execution; where having suffered like pains, his Quarters were also returned to Newgate on the same Hurdle which carried him. His Majesty was pleased to give, upon intercession made by his Friends, his Body to be buried.

Tuesday following, being the sixteenth of October, Master John Cook, and Mr. Hugh Peters, were about the same hour carried on two Hurdles to the same place, and executed in the same manner, and their Quarters returned in like manner to the place whence they came. The Head of John Cook is since set on a Pole on the North-East end of Westminster-Hall (on the left of Mr. Harrison’s) looking towards London; and the head of Mr. Peters on London-Bridg. Their Quarters are exposed in like manner upon the tops of some of the City Gates.

Wednesday, October 17, about the hour of nine in the morning, Mr. Thomas Scot, and Mr. Gregory Clemen, were brought in several Hurdles; and about one hour after Master Adrian Scroop and Mr. John Jones together in one Hurdle were carried to the same place, and suffered the same death, and were returned and disposed of in the like manner.

Mr. Francis Hacker, and Mr. Daniel Axtel, were on Friday the 19th of October, about the same time of the morning, drawn on one Hurdle from Newgate to Tiburn, and there both Hanged; Mr. Axtel was Quartered, and returned back, and disposed as the former; but the Body of Mr. Hacker was, by his Majesties great favour, given entire to his Friends, and buried.