Chord inside the Kingsway Subway Tunnel

Today I finally achieved something I have wanted to do for years, and got to see a rather interesting bit of art into the bargain.

Underneath the Kingway road in Holborn lies the Kingsway Tramway that used to carry electric trams until it was closed down in the 1950s. Since then it has been basically a storage dump for the local council and only on very rare occasions opened to visitors.

Over the next few weeks though, an artist has managed to put a specially designed bit of industrial art inside this closed-off tunnel and is letting people in to have a look.

At the top of the ramp leading down to the subway is a set of locked gates that have stood guard over the entrance, mocking the passers-by who can often be seen peering through the railings and wishing they could stand on the other side.

Today, those gates were flung open and a group of us went down the slope to the dark cavern that hinted of wonders within.

After a brief warning that it would be a VERY bad idea to lean on anything as it is filthy down there, we were taken along the tunnel to the old Holborn Tram Station where we lingered for a short while posing for photos and looking around. 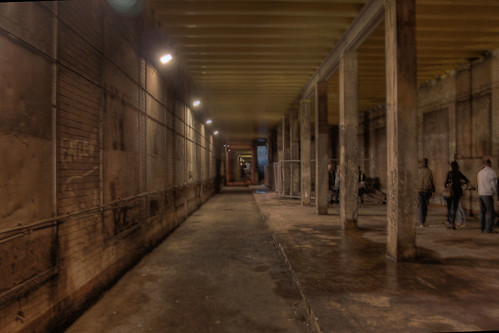 Then down to the art itself.

Basically, two large “knitting machines” that slowly rotate to uncoil ropes which twist to produce a single strand as the machines slowly pull apart along a wooden railway. 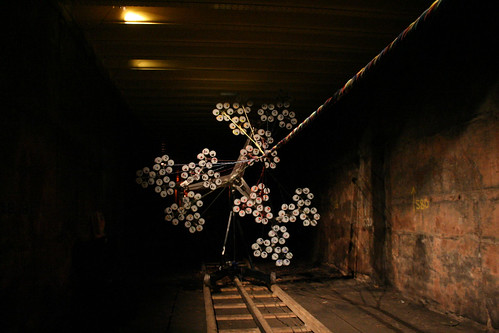 Chord is concerned with the human perception of time, as both a linear and cyclical notion. The rope becomes a strong structural metaphor, a clear linear entity made up and formed by a cyclical process. Each point on the rope can be traced back to a certain moment during the cycle and duration becomes interchangeable with length, time with length, time with space, an hour becomes 20cm, a day five meters.

Which is yes, well, quite.

I sort of understand what he is trying to say, but frankly, it is not really relevant for me. Either I will like it, or I won’t – and explaining it may make me appreciate it more, but it won’t change whether I liked it.

Fortunately, this is something that I liked. Actually, I liked it a lot. 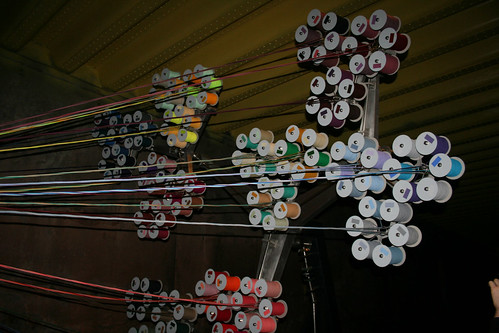 There was something about the very crisp clean industrial machine slowly rotating its kitting yarns as it plied out the rope that really worked for me.

Setting it inside a semi-derelict site added to the experience.

One thing that doesn’t really come across from the photos, or the text I read about it is that the rotating structure moves quite quickly. Although the linear movement is imperceptible, the rotating is reasonably speedy. That seems to make it a much more interesting thing to look at.

Also, unlike some fussy art venues, here is one where people didn’t walk around in hushed awe, but darted around with cameras taking photos with gay abandon. This is art you don’t have to be reverential when granted permission to be within its presence. 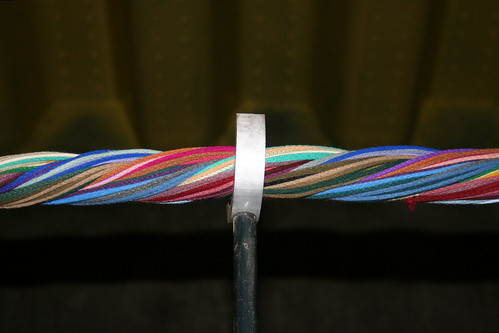 The guides who accompanied us down were happy to chat about the art, the tunnel or just gossip.

A hole in the roof was pointed out and they are going to have to work out how to cover it as the unfurling structure moves slowly down the tunnel. Otherwise, you are going to get a wet chord.

That hole has allowed a lot of autumn leaves to fall down into the tunnel, and as a bit of art about time, I do like the idea that over this weekend, the spinning structure will “pass through” autumn.

No idea if it was designed that way, or if I am just pretending to be a “wanky art critic” when I noticed that.

Thirty minutes is what you get down in the tunnel and then you are eased back out into the sunlit lands. 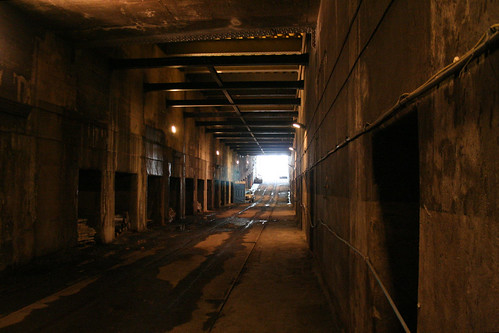 I went in unashamedly to see the tunnel. After years of anticipation, it was important for me that the art didn’t spoil the visit, and I am delighted that it added to the experience.

There are a range of events around the installation, including a talk about the art and one about the tunnel.

Various other London bloggers I know have been down there already:

You can book a free visit via the Measure website, but only have until the 8th November before those gates are once again firmly sealed shut in the face of curious visitors.