A look around Chipping Ongar Church and Castle

Peeking out behind some wonky wooden buildings on Chipping Ongar’s main street is a glimpse of the ancient town church, which is nearly a thousand years old. Built around the time of the Norman Conquest it is a result of the reallocation of lands to the victors of that war who needed new churches in their preferred style. 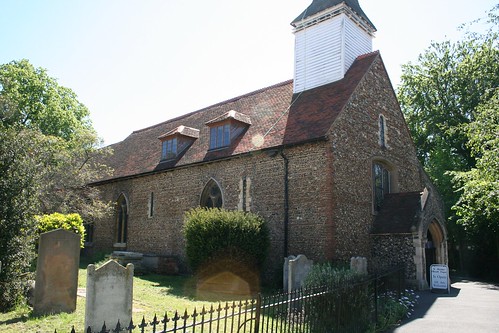 The Church itself is dedicated to St Martin of Tours, a Roman soldier, and it was originally thought that the bricks incorporated in the walls were reused Roman bricks, but it was later found that they are of 11th century manufacture.

A welcoming sign outside assures that the church is open, and as I wandered inside a couple outside were seemed slightly surprised that entry is permitted. A couple of modern doors in the porch open to a smell that most old churches have. A bit like visiting granny and being hit by an odour of boiled cabbage when the door opens, this totally different slightly musty smell is reminder of pleasant memories visiting old churches and libraries. 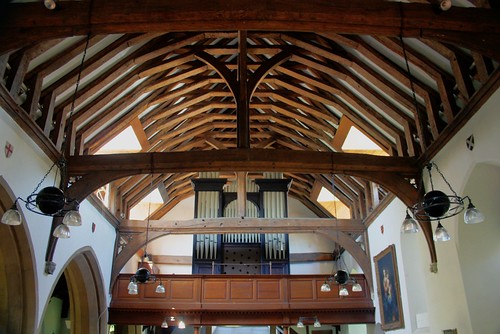 Although the outer walls are still of Norman construction, the roof beams inside were added a couple of hundred years later – possibly replacing a thatched roof (?). The main window above the altar was designed around 1300 to replace some smaller windows – presumably wealth enabling them to buy the glass for the larger window design. Sadly, the glass in there is not original and dates from 1929.

A new organ at the back of the church was installed in 1896. The side Lady Chapel was added in the 19th century and doubled up as a school (a very small one!) for a while. 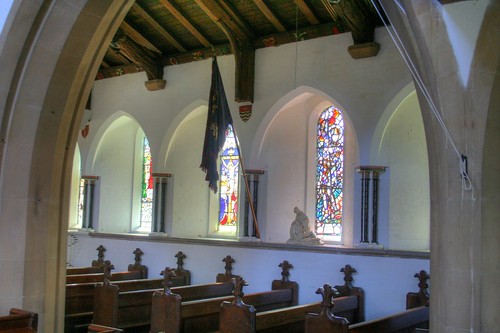 Leaving the church and carrying up the gravel road you come to a footpath that runs beside the local fields. Following this and you will be able to walk around the perimeter of the remains of Chipping Ongar Castle.

Sadly walk around is all you can do as the land is privately owned, and off limits to the public. It is also now just a mound surrounded by a moat and covered in trees, so there is little to look at if you want stone castles, but it is a delightful country diversion and you will see evidence of the huge central mound that originally dominated the area. (map link) 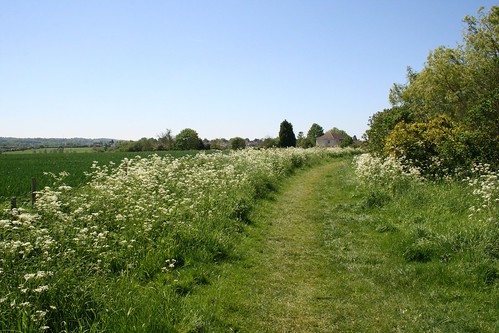 The original fortifications may have been built by Eustace II, Count of Boulogne who obtained the manor of Ongar in 1086 – and built the above mentioned church. As a Motte and Bailey mound surrounded by deep ditches and wooden walls, it would have been an impressive sight in the area – either to protect, or subjugate the local inhabitants, depending on your point of view.

Walking around the footpath you can see the current residents houses, and a large sign warning that it is private land a bit further along. Through a gate where a sign helpfully notes a Permissive Route to Ongar Castle, without noting that you are actually standing next to it does take you around the Outer Bailey and up close to the Motte, which can be seen as a huge mound surrounded by a deep ditch. 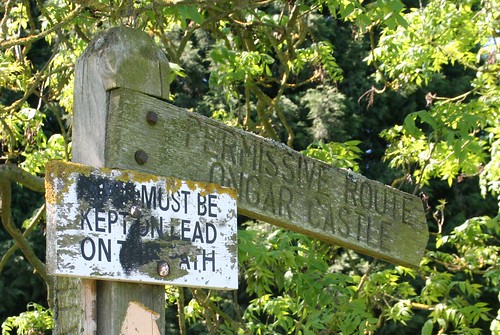 Continuing around takes you through another set of footpath gates and eventually back to the town car park, where a metal sign offers more information about the site, which has never been formally excavated, so maybe hides some exciting historic artefacts waiting to be uncovered. Or not. 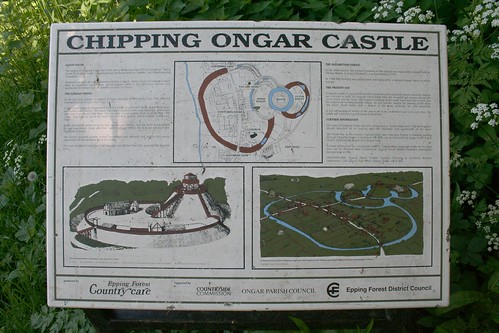