A series of sculptures created using robotics, live insects and crochet are being put on display in a new exhibition based around Charles Darwin’s face. The face when he was old, and beardy, and famous — not when he was young, clean shaven and unknown.

Taking place in that ever eclectic venue, the Grant Museum, the exhibition has seemingly been inspired by a classical Victorian-era bust of the naturalist that is currently on display.

After the bust was moved from UCL’s Darwin building in 2011 the university launched a competition for students and staff to replicate the bust to fill the empty plinth on the original display site.

It also just happens that today is Darwin’s 205th birthday.

Entries to the competition include Jo Howcroft’s bust recreated from layered theatrical lighting filters. Another student, Cristina Amati, has created Darwin as a crocheted floating head complete with sparks of insight in his beard. Graeme Smith and Tom Catling (joint entrants) have sculpted a miniature Darwin bust USB stick carrying the digital Darwin’s data encoded into nucleotides ready to be stored in DNA.

Personally, I liked the carving of his face into a copy of his seminal publication, On the Origin of Species. 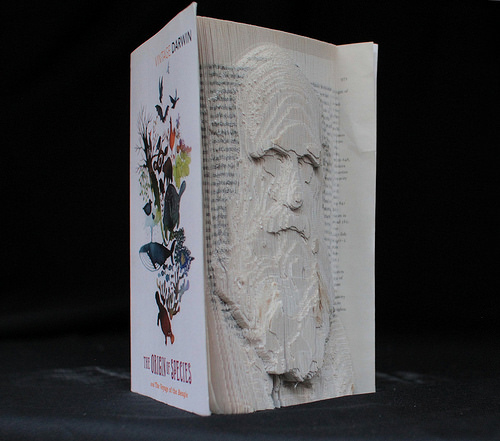 Rather more icky is James Mould’s nutrient enriched gel cast into the shape of Darwin’s head, which will be inhabited and excavated by an ant colony.

Two of the exhibits — the ant colony and a chocolate one are not in the Grant Museum itself, but in a nearby building, as they pose a theoretical risk to the other exhibits as they might attract vermin… or more likely, be eaten by the residents of the Glass Jar of Moles.

The exhibition, Darwin (or) Bust is open until 2nd April during museum opening hours, which happen to be Monday – Saturday 1-5pm.