Part of Charing Cross tube station is to close from next month for nearly a year as TfL revamps the rather tired 1970s decor of the ticket hall.

The main ticket hall — originally built for the Northern line, and the one closest to the mainline station will close on Monday 26th September, and wont reopen until July 2017.

In the meantime, although passengers could use the smaller exit under Trafalgar Square, they are advised to use Embankment as an easier alternative.

The smaller Bakerloo line ticket hall, which is similarly outdated, will also close for refurbishment from July 2017, after the Northern line ticket hall has reopened and will be closed until December 2017.

Mark Wild, Managing Director of London Underground, said: “The Northern line ticket hall at Charing Cross was opened in the 1970s, and now feels tired and unwelcoming. This work will improve the ticket hall, making it bright, modern and a better place for our customers to pass through.”

Interestingly, the use of the emerald green decor was described in 1979 by Building Week as notable for the use of bright primary colours as opposed to the drab yellow that had been planned.

Today we look at that bright green and think, goodness, how dated is that. 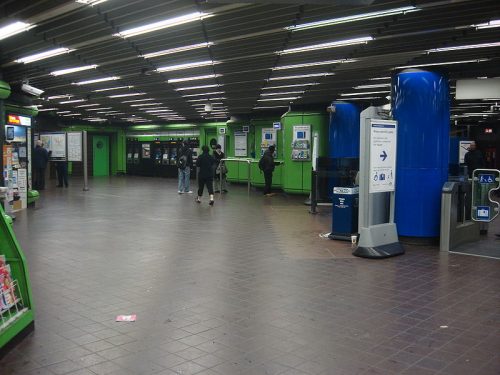 So it is to be swept away. TfL hasn’t released any images of the planned changes, but it’s noted in their Station Design Idiom, that the station is one of many being earmarked for the 2015 Palette, which is a mix of blue and light grey. Very much in keeping with other recent station works.

In addition to the colour change, expect a new straightened gate line with more space at the top of the escalators and improvements to the lighting. The works will also create new retail space and a new, larger entrance to the Northern line ticket hall.