Updated — see at the bottom for an explanatory note.

There sits underneath the forecourt of Charing Cross railway station a hidden marvel, the remains of a Hawksmoor designed church that is today sealed off and hidden — except for one prominent and often misattributed visible sign of its existence.

To understand what a church is doing hidden underneath the road, we have to go back to the Commission for Building Fifty New Churches which was enacted in 1710.

Although it fell far short of the 50 target, one of the many that were built was St Ēostre without Hungerford, which was situated just outside the Hungerford Market which stood on the site of today’s Charing Cross railway station.

Having a prominent church so close to a major site of commerce was considered doubly wise, as it gave the merchants a place to pray for their sins, and ensured that the church had a wealthy customer base to support its running costs.

The market however was not a fortunate one, and burnt down and was replaced by a new grander building in 1833, which was a commercial flop, and when it was damaged by another fire in 1854, it closed, and was sold to the railway company in 1862.

So, the church which had expected to survive on the wealth of the market found itself in a perilous situation when the railway company came along. They quite understandably didn’t really want a hulking old church on their doorstep.

You can see the church marked here on this map in front of the Hungerford Market — marked as a black blob in the middle of the road. 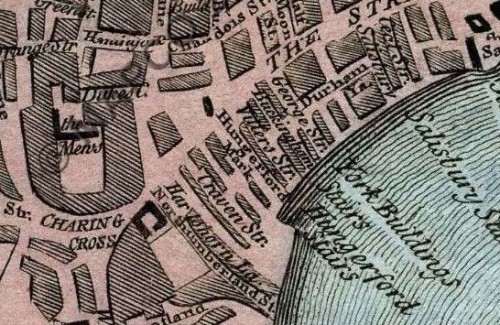 However, in one of the early acts of conservation, a petition was raised in 1862 to force the railway company to preserve the building in some manner.

The matter made its way to the House of Commons, where a debate on the 1st April 1863[1] to discuss the issue ordered the railway company to find some way of preserving the building, even if it couldn’t be used for its original purpose any more.

The wily company found a compromise all right — they buried the church!

Or more accurately, they raised the land around it. Anyone familiar with the area will know that from The Strand, there is quite a noticeably steep decline to get down to Embankment. Well, back in the 1860s, that slope was considerably shallower.

The railway company wanted to raise the station up high, so that their trains would pass over the Thames on a high bridge, and to that end, they took much of the Strand, and raised it upwards by an entire storey[2].

At the time, a lot of shops found their ground floor becoming their new basement, and they traded out of what was their first floor. This was not that unusual, and examples of similar schemes can be found all over the country, in Edinburgh, Keighley, and even in London with Little Compton Street being still visible through a street grill.

The cost of compensation to Strand shops though was nearly ruinous to the railway company, and disputes about the matter lingered on long after the railway station had opened.

But back to the church.

This now stood below the height of the road, but it’s pitched roof would have blocked the new road that ran in front of the railway station. So, they announced their intention to simply slice off the top of the church, and replace it with a flat roof, and then the Strand road would run over the top[2].

This was nearly blocked by protests from traders at the nearby Covent Garden Market, but this time the railway company was able to persuade Parliament that it simply could not afford to raise the road any higher, or divert it around the remains of the church.

They did however agree to one compromise, and was to leave one bit of the church still visible above ground, and it is still there today if you know what you are looking for. I will come onto that marvel later.

Anyway, in 1864, the railway station opened, with its new forecourt and the newly paved Strand road running right outside, just as the company directors had wanted.

A grand success in bringing a modern steam railway from London Bridge right to the heart of London, and with a modern road network to support the omnibuses that would bring the fare paying passengers to the station.

So, although it was effectively buried underground and pretty much sealed off, having been somewhat duped by the railway in the 1860s, the Church Commissioners in a fit of pique, refused to deconsecrate the church[3].

It is still technically a functioning place of worship.

However, although not available for daily use, it was agreed that a blessing service would take place annually to keep the sanctity of the building intact. 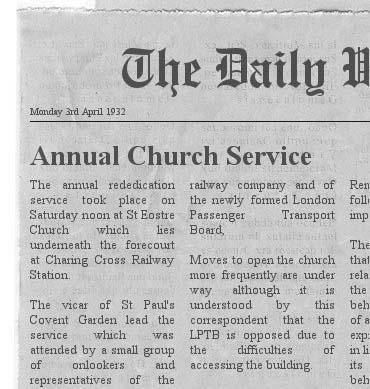 That annual tradition continued right up to the Second World War, when the church was hit by a direct bomb impact on the evening of 14th October 1940. 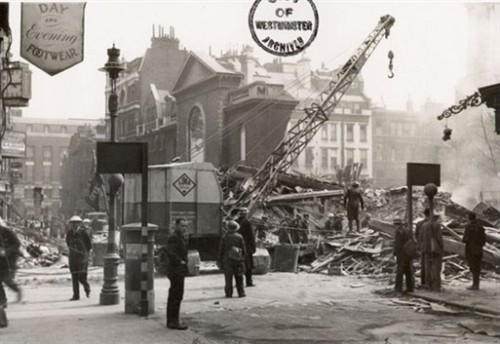 Repairs to The Strand outside Charing Cross Station following the bomb impact.

As the church sits directly underneath The Strand, it was hastily patched up, but full repairs to secure the interior did not take place until 1951, and mainly to secure the road above than to restore the church. The works coincided with bomb damage repairs to the Charing Cross Hotel which had also been badly damaged during the war.

Sadly, the great altar, with its gold embossed motto, Stulti vadunt eo quo angeli verentur ingredi was badly damaged and was deemed to be beyond repair. 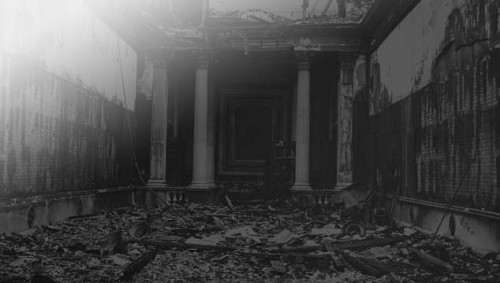 It is claimed, although I have been unable to corroborate it, that the undercroft under the church was used as storage during the war, but that it was filled in with the rubble from the bomb damage. I have found previous references to a void space above vaults used by Courts Bank, which could be related to this phase of its use.

The subterranean church then found itself serving a secular master for a few years in the mid 1970s, when it proved to be a useful office space for engineers working on the Jubilee Line extension which was due to terminate at Charing Cross.

Although most of the staff were based in nearby offices, as the underground church sat so close to the station entrance, it proved a very handy location for a modest meeting point and for workers signing in to the station, as there is a side tunnel offering access to the digging site on the passage to the Northern Line.

That entrance is still there as it happens, and was used recently by a TV Sherlock to travel to Aldwych (which infuriated tube geeks).

But what about the bit that you can still see above ground?

Well, surprisingly, its hidden under a confection of decoration — for the church spire still stands poking above ground, right in the middle of the Charing Cross forecourt.

That huge Victorian replica of the Eleanor Cross is not just a free standing folly, but is cladding wrapped around the church steeple. Recently restored in 2010 after being put on a buildings at risk register in 2008, that massive construction conceals within its core the original 18th century church steeple[4].

During restoration works, it was discovered that the steeple has deteriorated somewhat, and it was decided to fill in the wooden void to prevent more damage.

However, that tall decorative folly that most people walk past with barely a nod is in fact the visible remnant of an even less well known church beneath their feet.

Which is quite amazing.

The church itself was handed back to its religious authorities in the early 1980s after the Jubilee Line works were finished, and while the annual service no longer takes place, they do still hold one once per decade.

Yes. today marks that one-in-a-decade blessing, and at noon the local vicar and a small choir will return to this locked and hidden holy vault to carry out a short service.

As I understand it, they progress through the subway underneath the Strand, which runs alongside the church exterior, and then are let into the church through an entrance in the subway next to the tube station.

There’s enough space inside for visitors, and anyone who turns up just before noon can follow the procession inside and after the short service, spend a short time inside this most unique of locations, and one that remains locked and unused for most of its earthly existence.

See you there later today.

[3] Proceedings of the Church Commissioners 1864

If you got this far down without realising… then April Fool!

I am sorry to those who turned up at Charing Cross at lunchtime, who didn’t see the funny side of things, and sorry to waste the time of those who did appreciate the joke.

The hints, such as they were are that there is no church by that name listed as one of the 50 planned churches, and indeed, no Saint Eostre. Even the existence of the pagan god Eostre is dubious.

More damningly, maybe is that Stulti vadunt eo quo angeli verentur ingredi is a reasonable Latin translation of Fools rush in where Angels fear to tread.

The rest is all fake as well, the results of an overactive imagination.

The map is a doctored version of this, while the photo is a random bombed out building, which I darkened then added what I hope vaguely looked like sunlight streaming in. The newspaper clipping is generated over here.

There is a Survey of London, but no Surveys of Greater London. Likewise Older and Newer London is actually the excellent six-volume Old and New London.