A giant railway terminus was once planned for central London that would have swept away all the land between Holborn and Farringdon. Obviously never built, its failure indirectly lead to the creation of the London Underground.

In the 1840s, London’s streets were congested to a near standstill, and many plans were considered to improve transport, especially from the mainline railway stations to the City offices.

One, of several, proposed over a number of years was from the City of London solicitor, Mr Charles Pearson, a man who was a dogged promoter of transport improvements in London, until he finally secured support for a radical idea — an underground railway.

But that was for later. In 1842, he proposed another underground railway, but where the underground part was a mere sideshow to the main act — a massive railway terminus building at Farringdon.

This would bring both people and cargo into the heart of London, removing vast numbers of bus journeys and burdensome cargo carts from the congested streets.

What was proposed was known as the Grand Central Railway Terminus, and would have seen railway lines coming into London where King’s Cross today stands and then running in a cutting pretty much where the Metropolitan line today does down towards Farringdon. Unlike the London Underground today though, Charles Pearson planned to cover the railway with a wide road. This would have been possible as the railway line being planned was six tracks wide — much wider than the 4 lines currently shared between Thameslink and London Underground. 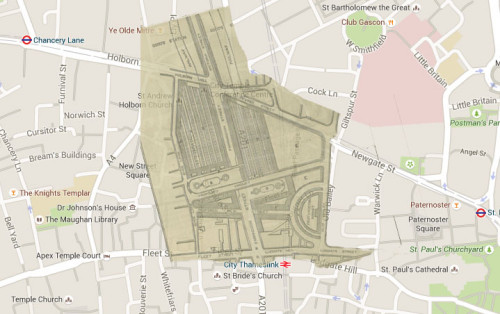 As the site for the railway station ran all the way down to Fleet Street, the plans also called for the raising of the road on a mighty viaduct to avoid the deep fleet river depression in the area. Again, he was foresighted, for the viaduct was later built, at Holborn.

The plan was costed at around £1 million.

Obviously, it was never built, mainly as in 1846, a Royal Commission effectively killed the idea of a central terminus in London, preferring a string of pearls around the edges. A proposal that still defines London’s mainline railways.

So where Farringdon Station is today a sizeable, but passing station in the middle of several railway services, and soon to gain a Crossrail link, it could have in fact been as mighty a location as any major terminus that feed into London.

However, had Charles Pearson been successful, his attention would have been devoted to this mighty work, and the spur to keep pushing for some other form of transport improvement would have fallen to the wayside.

This station could have killed off the London Underground before it was even born. 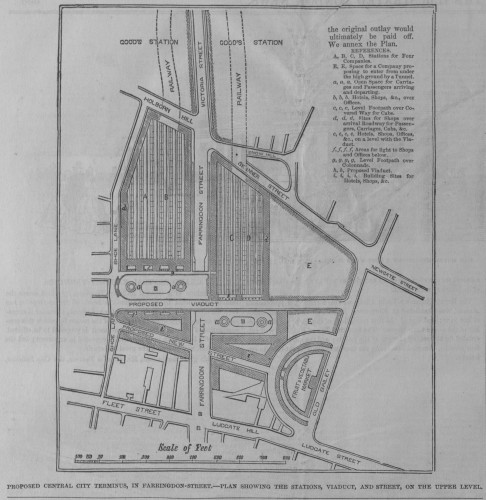