Catch a steam train from London to Paris

If you look out for it, on Friday 9th October, a steam train will leave London Victoria station, and its passengers will arrive in the evening, in Paris.

It’s a one-off restoration of the old Golden Arrow service which ran between the two capital cities from 1929 to 1972.

The service was a combination of three separate offerings, and came about from the French running a steam train service in 1926 from Paris to Calais, with a ticket on a ferry to England.

With a typical English delay, it took three years before a rail link was added on this side of the water, and from then on, it was possible to catch trains to Paris, from Victoria Station.

Incidentally, the English leg of the trip used Lord Nelson class locomotives, and occasionally called at Waterloo Station. It’s almost as if our side set out to offend!

In 1961, the service switched from steam to electrics, and declining traffic saw it closed in September 1972.

A revival took place in May 1994 as part of the celebrations to mark the opening of the Channel Tunnel, and this October, another attempt is being made.

The Railway Touring Company has managed to patch together the necessary permits and line up services so that a steam train will leave London Victoria once more, although at the less genteel hour of 7am, and arrives by steam in Paris later that evening.

As it happens, the Golden Arrow insignia, of ‘Golden Arrow’ titles on a green disc with a golden arrow element passing through the two ‘O’ letters is still a registered trademark and is still owned by the Department for Transport. 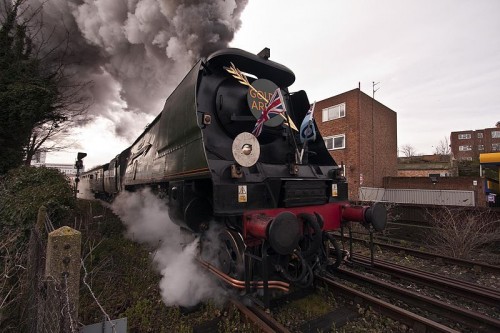 Sadly, it would probably be impossible to run a steam train through the Channel Tunnel and offer a complete end-to-end service. But anyone want to try?