The team that built the UK’s youngest steam locomotive are seeking to usurp its title by building an even newer, and vastly more powerful steam train — and this evening was a chance to hear about the project.

Designed by railway legend, Sir Nigel Gresley, the P2 class trains were the most powerful steam locomotives to ever run on the UK railways. Designed for hauling heavy loads around Scotland’s often steep mountains, they are an unfinished project.

Only a few were ever made, then WW2 got in the way, and afterwards they were rather badly redesigned and were retired after a mere 15 years of service. 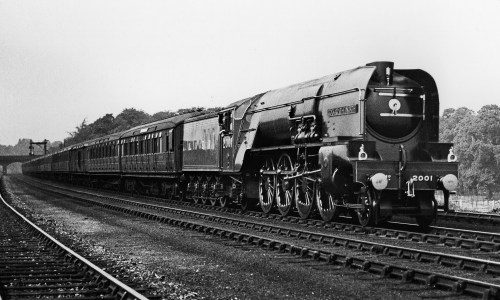 As such, the P2 is a railway “what if” moment. What if war hadn’t stopped development. What if they hadn’t been hacked to pieces afterwards by an indifferent engineer.

What if these lost giants had fulfilled the promise they offered and became truly the legend they could have been.

So, the team behind the recently built A1 Tornado have moved up the alphabet a bit and want to build a new and improved P2 class locomotive — and it will be the most powerful steam locomotive to ever have run on Britain’s railways.

It’s improved, only in that now known problems will be fixed, but otherwise it will be largely a P2 engine. Fortunately, many of the parts for the Tornado are going to be interchangeable with the P2 (to be called the Prince of Wales), so that reduces upfront costs, and long term maintenance headaches.

They also have to alter some of the specifications a bit to fit modern railways, which it turns out have an extra 2 inches of clearance space between train and station platform compared to days of old, so modern trains are narrower than they used to be.

The team have turned to the archives, and drawn on canvas in indian ink are many of the original blueprints for the locomotive, which have since been scanned, and now, converted into 3D renders for modern construction.

This is very much a modern locomotive, built using modern materials and methods, but to an old design.

That also means more accurate specifications for the materials, and “this bolt to be a good fit” wont quite do any more for the engineers. As to requiring that part of the locomotive “be of the best Yorkshire iron” sounds lovely, but doesn’t quite meet ISO standards.

Of course, they also have to work with modern signals, and while heritage steam engines sometimes make do with jerry-rigged set-ups run off batteries, both the Tornado, and future Prince of Wales were designed with electrics from the start.

Yes, a steam train has around 3.5 miles of electric wiring in it, based on a generator powered by the steam engine itself. If you want more details, then the Haynes Manual is the place to turn to.

In fact there’s loads of surplus energy in a steam locomotive.

They’ve even fitted electric lights underneath the train, which is purely to help with maintenance you understand, but by gosh the train does look good when the wheels are lit up at night while racing through the countryside.

As one comment put it this evening, the energy extracted from the coal means they are 6% work and 94% fun.

But to have the fun, they are still fundraising, and you can do anything from a donation to sponsoring a component.

In fact, the sponsorship angle means you can buy the perfect gift for Christmas, as the sponsor gets a copy of the engineering drawing of the object and a photo of it to hang on the wall.

Details of how you can support the project, are here.

All going well, the project to build the P2 Prince of Wales is aiming to start trials on the mainline railway in about 4 years time. 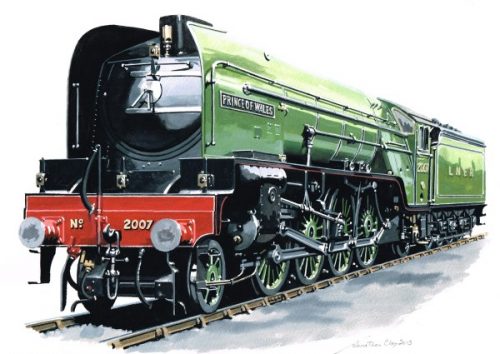 The first official painting of No. 2007 Prince of Wales by Jonathan Clay

Images via the P2 Project