Published 11 May 2014 by By Ian Mansfield Architecture

If you travel by train through Brixton, then you might have noticed through your windows just to the East of the town, a massive brick barrier. 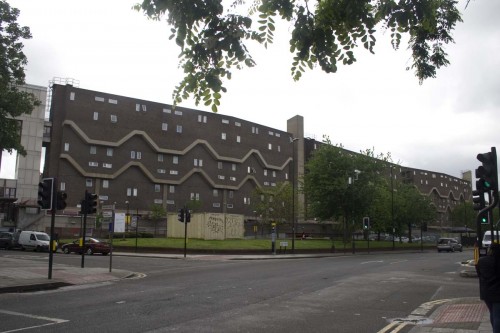 A vast edifice with small windows hinting at occupation and concrete escutcheons zigzagging along the brick wall. This is housing, but housing based less around the needs of the occupants than the requirements of what never arrived — a motorway.

People are housed in a barrier, a thick high brick barrier built as a wall to deflect the sound of motor cars rushing past. People housed in a building designed less to house them, than as a convenient side-function of a wall needed as a consequence of the rapacious needs of the motorist.

In the 1970s, the Greater London Council proposed a massive flyover through Brixton that would have run over Coldharbour Lane, much as the Hammersmith Flyover does in the West.

What was known as the South Cross Route came surprisingly close to being approved, and indeed some demolition work was carried out, but fortunately, political squabbles held the whole thing up just long enough for people to see sense that the motor car was not a metal God to be worshiped regardless of how it ripped through communities.

So the massive flyover was cancelled, but not before what is officially known as Southwyck House was built alongside where the flyover would have gone.

Its design is entirely dictated by the flyover — the high massive wall of brick was built explicitly to repel the noise of the motorway. The small windows lead onto internal facilities, not bedrooms and lounges.

The concrete overhangs and zig-zag shape a rudimentary method of breaking up the noise of the motorist.

Southwyck House is a barrier, and not unsurprisingly, known locally as Barrier Block. Curiously, had the flyover been built, we might look at it today as a wise and clever design, but shorn of its primary function, it is left with just its secondary task — to house people.

And the people were reluctant to come. Squatted in by some, it later became notorious for crime and drugs in the early 1980s.

The monolithic block was later split into three separate units to break up the pedestrian rat-runs that had perpetuated crime, although they have have limited effect on the drugs and other social problems. 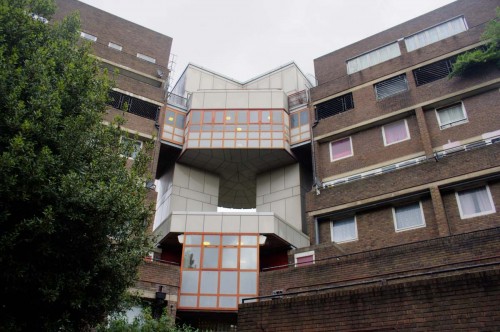 Two inserts at either end of the barrier block are almost reminiscent of East German watch towers, less facilitating access for residents than watching over them. The steel entrance and glass blocks are more designed to withstand abuse than welcome visitors. 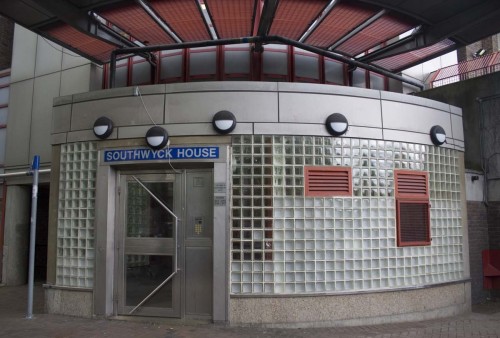 Two noisome corridors on either side lead to the residential estate behind the barrier, but are even less welcoming than the watchtowers. 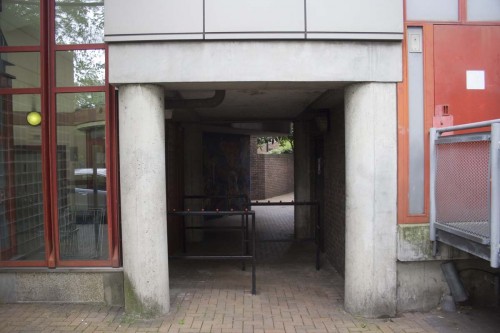 In the middle, a steel staircase encased in steel with steel steps does nothing to reduce the oppressive sensation. If a staircase could feel like a prison, then these seem especially designed to achieve that. 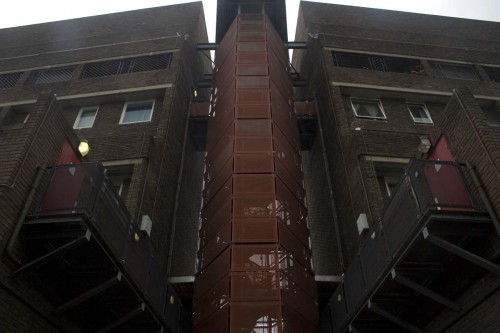 It’s almost as if the council thinking, this is a bad building, so how can we make it worse, got their wish, and lavished millions less on making it a more pleasant place to live in, and hence crime less likely, than simply surrendering to what they have decided is the inevitability of the situation, and turning the building into a prison in all but name.

A holding cell for inmates who they presume will soon be moved to the nearby Brixton Prison instead.

Municipal intrusions aside though, it is the sheer mass of monotonous brown brickwork that dominates the aesthetic. High walls line lower garden spaces creating narrow brick valleys at the foot of the barrier. 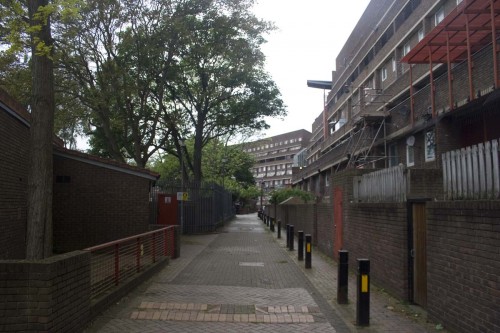 The barrier looms over the rest of the estate that lies behind it, overlooking the residents below. 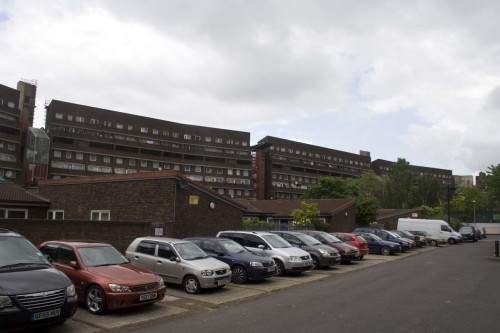 Incidentally, one of the young local councilors who approved the building plans was a John Major who lived on the local road, who later went on to describe it as an example of “grey, sullen wastelands, robbing people of self-respect”.

Probably the only redeeming feature is the legacy of the road plans, as a wide open space remains outside barrier, although in one place used by a car wash, the greenery is not entirely unpleasant. 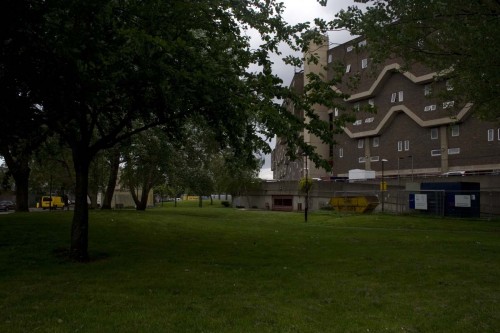 As a block, curiously, the barrier side looks the least offensive side. It retains its brutal necessity untouched by signs of human occupation. It is however the inserts added recently to try and cut down on crime that have actually despoiled the building and made it look more like the Brixton Prison that passersby often mistake it for.

Southwyck House is a sad near miss of a building, a single moment that survived from plans that could have seen Brixton flattened then replaced with high rise towers and motorways. 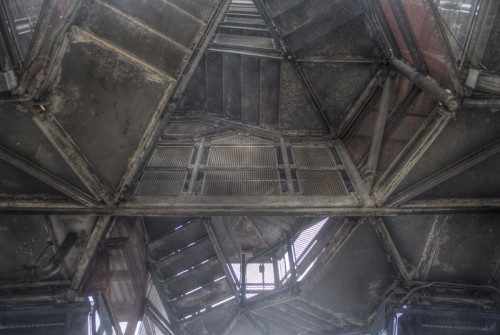 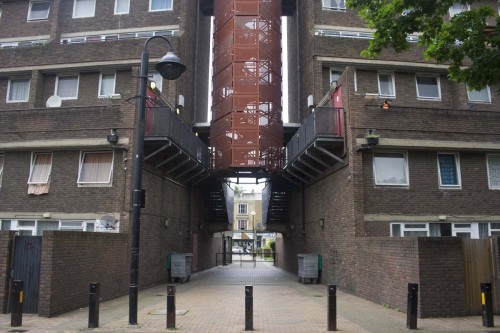 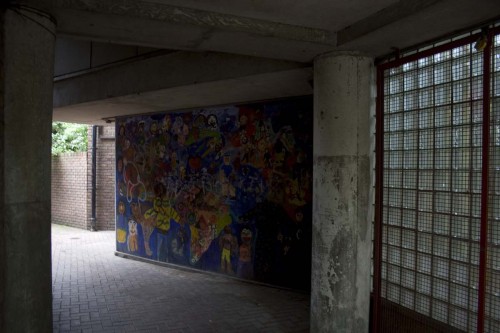 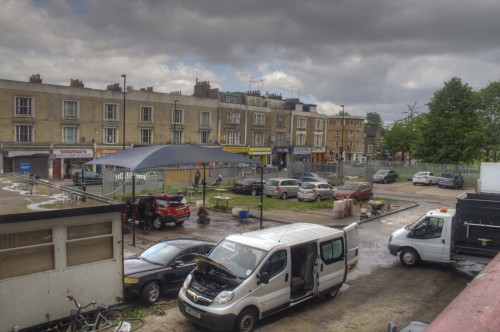 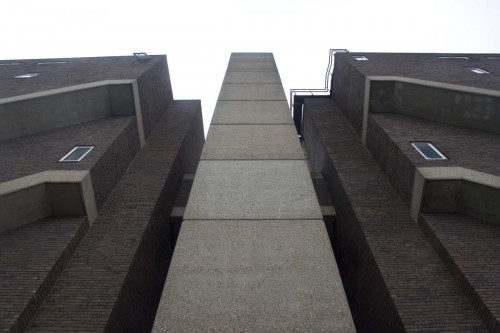 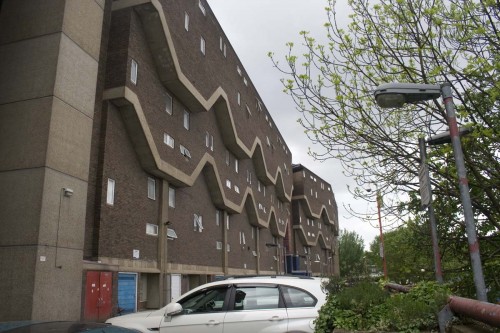