At the height of the art-deco movement, Southern Railways lead the UK in the move from steam trains to electric, and naturally needed some control rooms to manage the electricity supply. So they built a bunker just outside Woking, which remained in use until 1997 before being finally decommissioned.

Had you been in Woking last weekend, you could have taken a look inside.

Built in 1936 by the Swedish firm of Asean, it is built of concrete with flat roof and metal-framed casement windows. Even from the outside, this is a fairly impressive brick and concrete building, and was built to withstand a bomb-blast at a time when war with Germany was starting to look increasingly likely.

Although built right to the railway, access for pedestrians is down a short alley on a residential street, and past a barking dog in the neighbouring house. 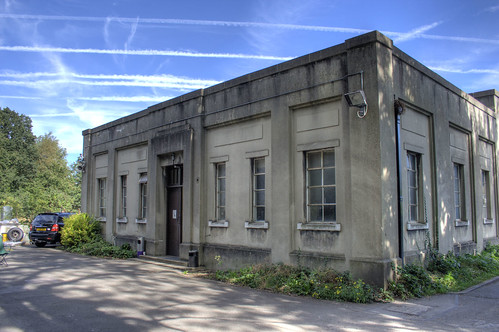 A corridor passes several offices, including one which was originally the inbound telephone exchange to the entrance block and within is a narrow corridor that runs around the edge of the building, while the inner sanctum is lined from the outside by walls of electro-mechanical switch gear. 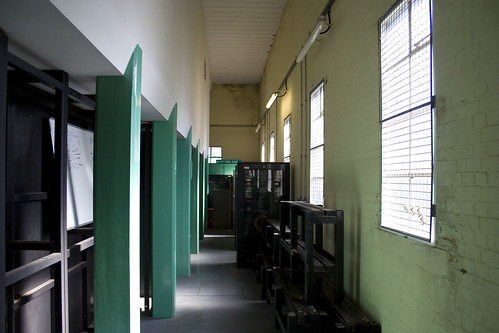 As alluring this sight is, it is the inner room that sits within the concrete block that is the art-deco secret within. The Control Room is oval with domed ceiling and has four ornate 1930’s lamps on cast-iron columnar bases with copper dishes which illuminate the dome as uplighters – and the huge light bulbs within them. 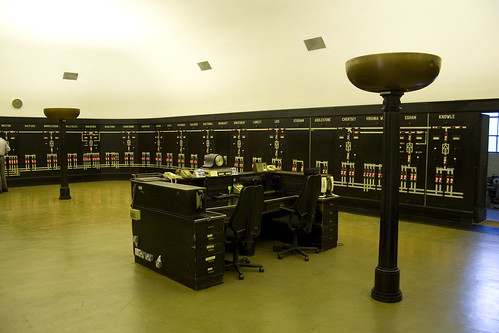 Around the outside of the room are the track diagrams arranged in a striking design of silver against black background with coloured lights to represent all the switches.

On this annual open day, small groups were taken around and given a very detailed explanation of how everything worked. Details which I am scared to recount lest the train-geeks scream in outrage if I get the slightest thing wrong 😉

Suffice to say that it needed two people to run the facility, and the job included monitoring the live network as well as ensuring that engineering works could be carried out safely. The inner control room originally had air ducts around the top of the curved ceiling, but these contained asbestos so were sealed decades ago. The room is therefore freezing in winter, and boiling hot in summer as the concrete walls suck up the heat.

Each of the display boards contained the name of the location or junction being controlled, with lights indicating various states of operation. The old-style filament bulbs all glow slightly even when “off” so that the operators can be sure the bulbs haven’t blown and need replacing. There is a distinctive hum in the room when it is working – which was very noticeable when they cut the power for a moment to show the difference. 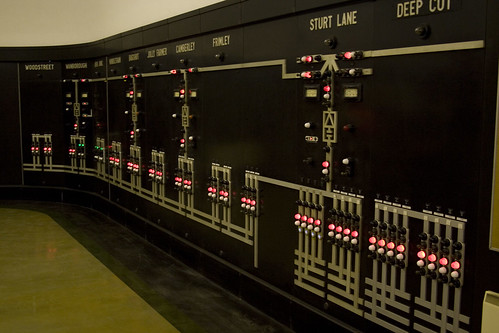 However, it is behind the control boards that will delight any electrical enthusiast as the electro-mechanical nature of this very early control room becomes apparent. I was pleased to ensure I photographed the Woking box, as it seemed appropriate. 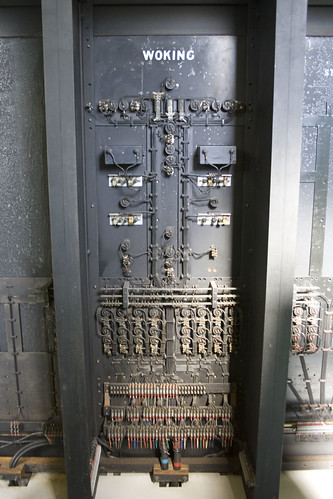 Dotted around the place are a few memories of its last days, including the 1997 calendar from when it closed, and mobile phone numbers with dialing codes from the very earliest days of mobile phones in the UK.

A memento of very old days which will probably confuse younger visitors was this old-school pencil sharpener. The telephone exchange at the main desk still needed to have the connections made manually and the handle wound to generate power for the phone. 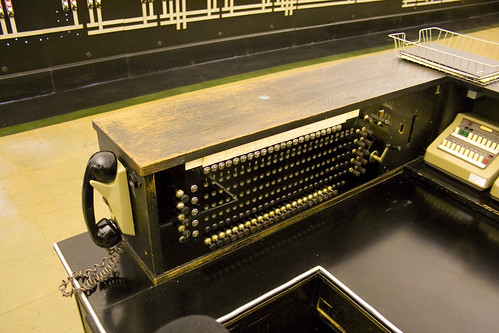 This was one of five original control rooms built by this firm for Southern Railways of which only three survive – Woking being the last to remain operational. It is now listed and preserved as it was left, although parts of the building are used for storage and an archive of old documents and scraps of electrical equipment. 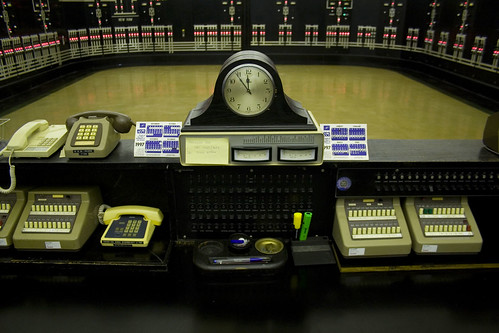 The control room is open to the public just once a year on the Heritage Open Days events. Put it in your diary for next September, it’s worth the visit.

There are more photos over here.