British Rail and the Flying Saucer

I was reading this week’s issue of The Economist and there was an article about commercial space flight, and how in the hype of the early NASA successes – companies were planning passenger flights into space. Naturally, the PanAm flight to the moon never took place, and it is only now that passenger trips into space are starting to become a reality.

Anyhow – what really made me sit up was the comment that of all the companies jumping on the space travel bandwagon in the 1970s was the UK’s state owned railway, British Rail.

A company infamous for delays and its culinary disasters in the buffet carriage actually took out a patent on the flying saucer. So a bit of hunting on the patent office website to see what I could find.

Yes, patent GB1310990 was actually granted to the British Railways Board in March 1973 is indeed for a “Space Vehicle” in the shape of the classic flying saucer.

From the patent itself:

A space vehicle includes a platform under which is provided a thermonuclear fusion zone to which liquid fuel is supplied under pressure to be ignited by beams from lasers. The platform mounts electromagnets, possibly superconducting magnets, to deflect charged particles produced by the fusion reaction; some particles are deflected so as to be received on insulated electrodes for generation of electric power. Excess thermal energy produced in the reaction is removed by cooling tubes to a radiating surface. The lasers may be energized by an homopolar generator. The latter may also be used as a reference for stabilizing the vehicle by varying the electrostatic voltages on sections of the electrodes to apply a correcting couple to the vehicle. By controlling voltages on sections and also the fields from magnets, the thrust on the vehicle can be directed to control the attitude and direction of the craft. A passener cabin is included. 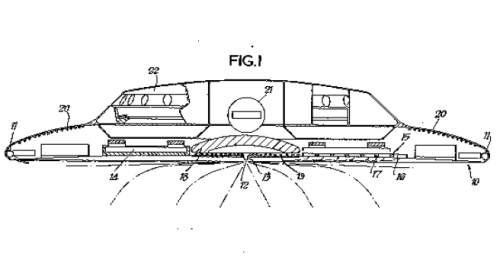 What is interesting is that at the time (as far as we know!) it certainly was not possible to harness superconductivity in the manner described, nor built a functioning nuclear fusion reactor. Even today, nuclear fusion is barely viable.

As the patent also notes though – Heavy material will shield the upper part of the vehicle from the nuclear radiation emanating from the reaction zone.

Presumably then, standing near the flying saucer during take-off would be extremely hazardous to health – although nuclear fusion does generate considerably less radiation than the conventional nuclear fission that power stations (and bombs) use today.

Alas, the patent has lapsed – due to the non-payment of license fees. Another sign of government cut-backs in our public transport system?

Article found on the Guardian Newspaper