One of the enduring images of the Blair government was a lone man sitting outside Parliament in a tent, initially against UK/US foreign policy, but later more specifically protesting against the Iraq War and occupation — and now some of that protest has come to the Museum of London.

Brian Haw started his protest camp on the verge of Parliament Square in 2001, and remained there until he was forced to leave, not by repeated legal attempts, but ill health. He died in 2011, aged 62, and some of his protest materials were passed to the Museum of London.

They’ve been cataloging the collection of 790 items, and the first display of some of them has opened in the museum’s small display area at the bottom of the main staircase.

It’s just a taster of the objects, but selected for the message they convey.

One window is full of the paraphernalia of protest, a big banner, made from scrap, which is starting to decay, and a collection of megaphones. It’s the cluster of megaphones that regardless of their context express the air of protest that the exhibition shows off. 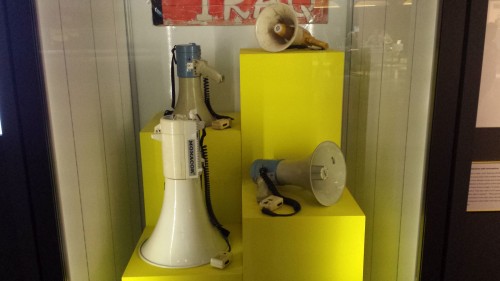 A more genial use of protest is the subversion of a cuddly teddy bear into an icon selling a message. A cuddly bear sitting behind logo of dripping blood. 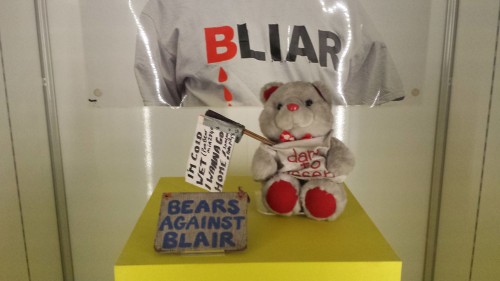 But in another case is the other protest that occupied his time — the protest against attempts to stop him protesting. A collection of umbrellas wrapped up in a police investigation bag.

A symbol of how the state tried to silence a single man — and failed, and is now on display for everyone to see. 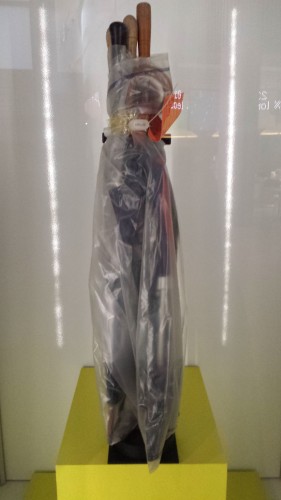 In a note on the labels, the museum says that they don’t have any recordings of his protest speeches, and would like copies if anyone has any.

The exhibition is open until 7th September. 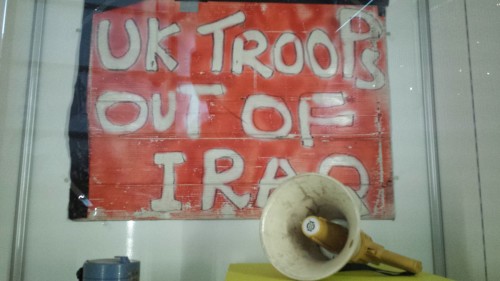