A year ahead of Barclays ceasing to be the official sponsor of London’s cycle hire scheme, they are to rebrand the bikes and shrink the Barclays part of the branding.

It’s still a Barclays brand, but the Barclays logo will no longer dominate the bikes as they used to.

In future, it will be more about “LifeSkills”

The new livery will be introduced across much of the bike network as part of what the company said is a “planned refresh”.

A planned refresh that is taking place a year before the Barclays logo is removed entirely from the bikes after it cancelled its sponsorship deal early.

The Barclays press release already describes them as “LifeSkills bikes”, although I suspect most people will still call them Boris Bikes. 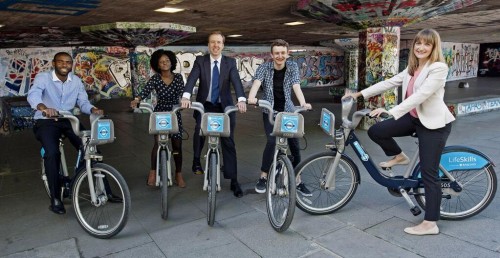