Published 21 April 2011 by By Ian Mansfield Events and Tours, photography

If you were by the Tower of London today, your ears might have rung with the Boom Boom Boom Boom of the Queen’s Birthday Salute by the Honourable Artillery Company by the banks of the Thames.

62 Booms in fact – 21 for a Royal Anniversary, plus a further 20 because the Tower is a Royal Palace and Fortress, plus another 21 ‘for the City of London’. 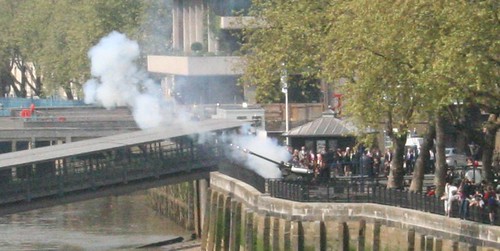 I tried to get close to the action, but was thwarted by a large crowd, and hopes to get onto the pier right in front of the guns was denied on the grounds that already poor hearing would probably cease to function altogether had I stood that close to the guns without protection.

So I ended up on Tower Bridge and wishing my camera had a better zoom to capture the boom.

Fortunately though, from that angle, I could just about make out the raising and dropping of a white gloved covered hand by each gun commander, so could set the camera to take a dozen photos just as the boom rang out over London. And two just about caught the red lick of flame that comes out of the cannons. 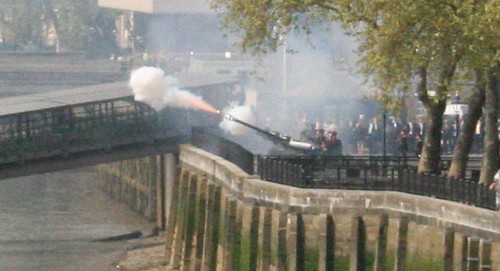 I think I’ll try Hyde Park next time as I suspect that might offer more space to get up closer to the action.

The Tower of London though is thought to hold the record for the most rounds fired in a single salute: 124 are fired when The Queen’s Official Birthday (62 rounds), which takes place on the 2nd Saturday in June coincides with The Duke of Edinburgh’s birthday (also 62 rounds) on the 10 June.

Sadly, the next time that will happen is in 2017 – so put that in your electronic diaries, and hope they (and you) are still around at the time. 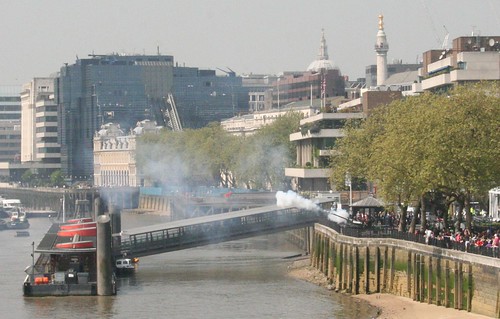 As noted above, the HAC carry out the gun salutes at the Tower, as they are the City of London’s territorial Army division. They also hold an annual open evening with military displays each year. This year will be on Tuesday 17th May, and has always an enjoyable night out.

With apologies to Blackadder goes Fourth for the blog post title.