A few days ago, I wrote about a manhole cover in South London — not just any manhole cover though, for this is a work of art by celeb-artist Antony Gormley. 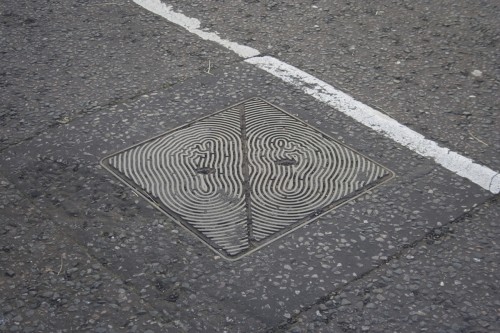 A few people joked that now I had written about it, someone would steal it.

Sadly, jokes have become reality, as at some point on Tuesday night, miscreants chose to manhandle the manhole cover and make off with its man inspired design.

I was made aware of the theft by a couple of unpleasant comments on the previous article, and a couple of messages elsewhere involving the use of fairly ordurous language. (and later, a half-page splash in the Daily Mail)

A quick return visit, and where there was once street art to delight the very few who knew about it, is a hole in the ground. Missing art. 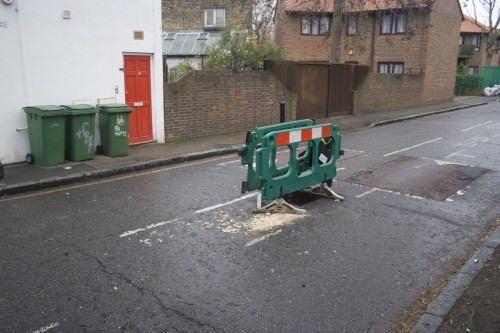 Thames Water checked for me to make sure it hadn’t been removed by staff for maintenance reasons, and yes, sadly the objet d’art has been stolen.

The lack of other manhole covers being removed suggests this was specifically targetted because of its celebrity associations rather than for its value as scrap metal, and it will doubtless be sitting in someone’s room one day as a work of art that can never ever by shown off to anyone ever again.

A day later, what was a spot in the road with some art work in it, looked like this. 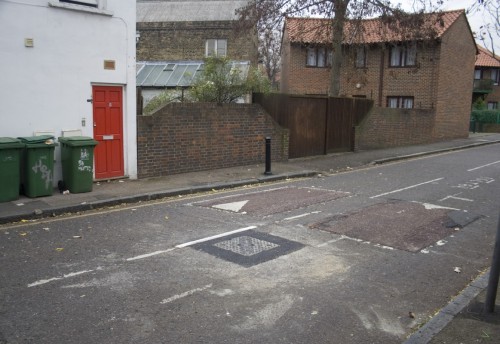 I have a somewhat ambivalent attitude to modern art, especially the ridiculous language used to describe it — I however love living in a city where these little jewels of delight are randomly scattered around the place. In public, for all to enjoy.

The artwork itself is almost irrelevant, it’s the fact that something unexpected has been placed there, hidden in plain sight for people to be delighted by when they stumble upon it.

I don’t want to live in a city where art can only be enjoyed in the hushed reverence of the holy spaces that are art galleries. I love to see bits of it randomly dumped all over the place. Even when I don’t care for the art, I like the fact that it is there. In public.

You can stomp on it, lean against it, laugh out loud at it — all the things you can’t do in a gallery. Sadly, you can also steal it. Although that happens in galleries as well on occasion.

London is enriched by public art, but not everyone is as inclined as myself to wander around always looking up and down, and never at the lamppost looming up in front of us — so someone has to write about the art. Say where it is, what it is, and tell people about it.

However, I also don’t want writers to have to censor what they say for fear that some moronic idiot will then turn up with a hammer one night and chisel it out of the wall, or the street.

Art needs to be shared, both by visitors to see it, and by writers talking about it. It is the sharing that enriches us, and the stealing that leaves not just a hole in the ground, but a hole in our hopes for a happier city to live in.

If art in a public space is stolen, don’t direct your ire at the person who wrote about it — direct it at the thieves.