Published 14 March 2011 by By Ian Mansfield Events and Tours

A note from the Royal Navy press office that the Royal Navy amphibious warship HMS Bulwark is taking a break from a busy training schedule to visit London and show off her helicopter and boats in action.

The warship arrives on Wednesday (tides suggest a 10am arrival) and will be at Greenwich for five days, with the main demonstrations set for Thursday late morning and lunchtime.

The rear of the warship also opens and floods a compartment allowing smaller boats inside to be launched, which sounds very much like the sort of thing a James Bond villain’s luxury yacht would do. Not sure if that’ll be part of the demonstration though. 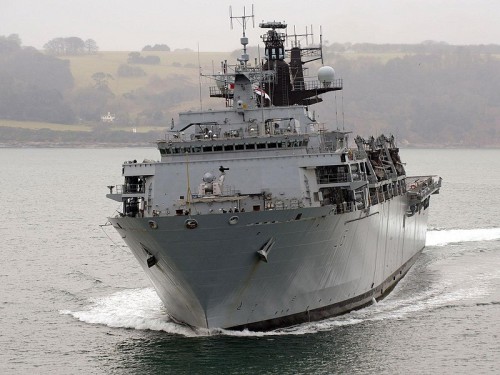 From the RN press release:

The main purpose of the visit is to display her capabilities with an exhibition showing how the Royal Navy can rapidly deploy in times of need with a wide range of assets and skills. Demonstrations will illustrate the command and control ability in all kinds of scenarios, from warfare to humanitarian with services such as field kitchens and medical and first-aid techniques.

The crew will also show off her hardware and a large variety of boats, land vehicles, amphibious landing craft and helicopters. The event culminates in a dynamic demonstration with boats and helicopters both airborne and afloat on and over the River Thames in Greenwich which might attract attention from residents, workers and tourists in the area.

More usefully for us bystanders, a separate note from the Port of London Authority gives the times of those public demonstrations.

Within each period detailed above, all activity will be concentrated in a single 5 minute slot during which 1 RIB and 2 ORCs will operate close to HMS Bulwark; helicopters will launch initially from the ship, into a holding pattern above Woolwich Reach and then back to the ship to ‘fast rope’ troops onto the deck.