Big Gun on Display at Woolwich

Published 20 February 2010 by By Ian Mansfield Events and Tours

Earlier this week I had an invite to go down to Woolwich to watch a BIG GUN being hoisted into public display. Sadly, unable to attend due to prior engagements such as earning a salary, I missed the chance to watch the event, but they did send some press photos this morning, so I thought I would put them here as the BIG GUN does look quite impressive.

Another advantage of not going is that the lift was due at 9am, but actually happened somewhat closer to 4pm and there would have been no way I could hang around for an entire day – and certainly not in Woolwich.

The 9.2 inch calibre gun is a rare surviving example of the large coastal guns installed throughout the British Empire in the early 1900s. This type of heavy artillery was used to protect strategically important coastal locations throughout the British Empire including Dover, Aden, Hong Kong, Singapore and Gibraltar where Firepowerâ€™s example was located for its service life. In the 1980s, the enormous gun was found in a Gibraltar scrap yard and was returned to Britain where it was made.

The 9.2 inch (23.37 cm) gun was first designed to be mounted on Royal Navy ships but was adapted for use on land to counter long-range attacks by enemy battleships and cruisers. It represents the pinnacle of coastal gun development in terms of accuracy and sophistication. Gibraltarâ€™s 9.2 inch guns were first installed in 1902, could fire a shell weighing 380lb over a range of 16 miles (25.6 kilometres) and remained in service into the 1950s when they were finally replaced by guided missile systems.

With appropriate timing though, Diamond Geezer also comments this morning on other people with guns being very cross about the Olympics coming to the area, although their guns are somewhat smaller than the one lifted into place on Thursday.

Sadly the mouth of the gun has been sealed up – probably to stop pigeons using it as a toilet, and kids using it as a litter bin – so the map below of its theoretical firing range is sadly now just wishful thinking. I quite liked the idea of sneaking in one night and firing shells over Central London, or possibly taking out half the world’s supply of polyester clothing by targeting the Bluewater and Lakeside shopping centers.

The gun is on display outside the Firepower museum of military history. 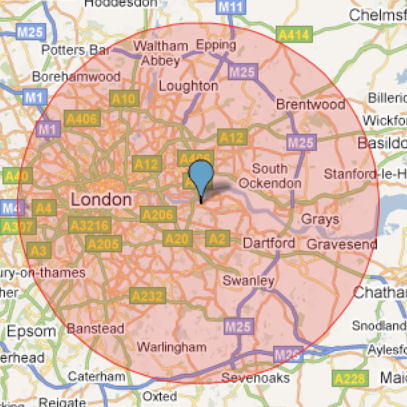 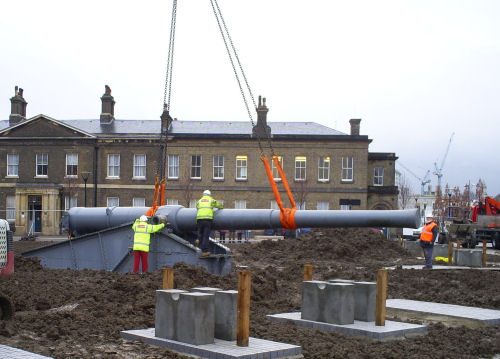 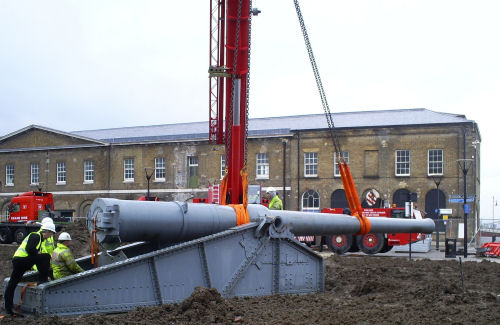 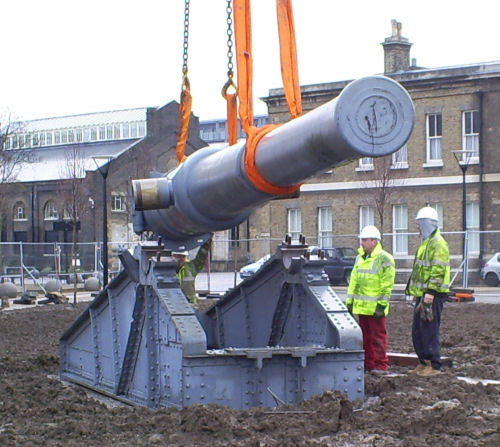