The turkey is cooking, the smell drifts around the single room you call home for your entire family. Small sprigs of holly and ivy, rosemary and bays decorate the room.

Suddenly, there is a knock at the door. Afraid, you tell the children to hush and hope the visitors will go away. It is not to be, more knocking, getting more determined each time.

Then an ominous sound:

“Open up in the name of the English Commonwealth!”

Reluctantly, you acquiesce and open the door, and soldiers from the New Model Army enter the house, look around and with a scornful look rip down the meagre Christmas decorations you were able to make, walk over to the fireplace, and ripping the turkey off the spit leave the house.

The year is 1650 and later that day, a report will be written for the Rump Parliament that citizens in the Cities of London and Westminster are attempting to celebrate Christmas despite the legal ban on such decadent behaviour. 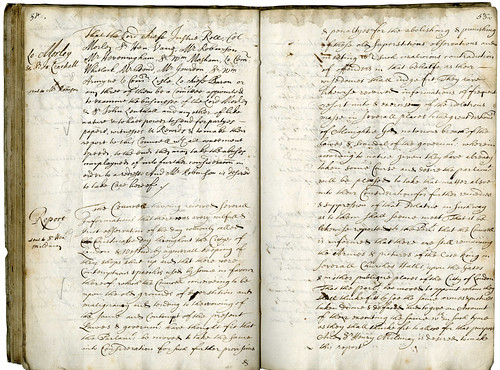 This note from the State Papers refers to a report that people in the City of London and in Westminster have been flouting his ban on celebrating Christmas. Image from the National Archives.

The Councell haveing received severall Informations that there was avery wilfull & strict observation of the day com[m]only called Christmasse day throughout the Cittyes of London & Westm[inster] by agenerall keeping of their shops shut up and that there were Contemptuous speeches used by some in favour thereof, which the Councell conceiveing to be upon the old grounds of superstition and malignancy and tending to the avowing of the same and Contempt of the present Lawes and governm[en]t have thought fit that the Parlam[en]t be moved to take the same into Consideration for such further provisions and penaltyes for the abolishing & punishing of those old superstitions observations and meeting w[i]th such malicious contradiction of offenders in that behalfe as their wisedomes shall iudge fit, They have likewise received informations of frequent resort unto and exerciseing of the idolatrous masse in severall places to the great dishono[u]r of Almightie God, notorious breach of the lawes and scandal of the governm[en]t wherein according to notice given they have already taken some Course and desire the parlam[en]t will be pleased to take that matter alsoe into their Consideration for further remedies & suppression of that Idolatrie in such way as to them shall seeme meet

That it be likewise reported to the Parl[amen]t that the Councell is informed that there are still remaining the Armes and pictures of the late King in severall Churches Halls, upon the Gates and in other publique places of the Citty of London

The government was at the time made up of Puritans, who believed that if you worked hard, you would get to Heaven. Pointless enjoyment was frowned upon. The Commonwealth shut many inns and the theatres were all closed down. Most sports were banned. Boys caught playing football on a Sunday could be whipped as a punishment. Swearing was punished by a fine, though those who kept swearing could be sent to prison.

(actually, that last one isn’t such a bad idea)

In addition, quite famously, Christmas was banned – although contrary to popular myth, it was not totally banned – but the celebration of it by eating and drinking was, and also the ban was imposed by the Parliament, not Cromwell personally – as at the time he was just a single member of the Council of State, and England was not subject to the dictatorship that he would impose as Lord Protector.

In fact there had been moves to diminish Christmas as a holiday even when King Charles I was alive. The Long Parliament, which was already dominated by Puritans and disproved of wasteful feasting, passed a law making it a requirement that everyone should fast on the last Wednesday of every month. It was intended that Christ-mass (or Christ-tide as they preferred) would supplant the final fast of the year, and by stealth, a tradition of fasting would replace the tradition of feasting.

June 1647 the Long Parliament also passed a law that banned all religious days in the calendar other than Sundays (Holy Days) – and announced a secular holiday on the 2nd Tuesday of every month to offer respite for servants.

However, once the King was dead, the Commonwealth was free to pass laws to strengthen the idea that only Sunday could be a Holy Day and that all other Popish Holidays were decadent and to be forbidden. Shops were ordered to be open on December 25th, and churches were forbidden to hold Christmas services. The Lord Mayor of London was ordered to ensure that trades continued as usual in the City of London.

In 1656, Parliament passed laws making the observance of the Sunday Holy Days even stricter (even going for a walk outdoors was banned, unless going to/from Church), but the fasting on the last Wednesday was dropped as it was never popular.

Fortunately, the Restoration of the Monarchy took place just four years later, and as part of the Restoration, it was decided that all laws passed between 1642-60 had no legitimacy and the sweeping reforms on religious worship were swept aside.

People were free to celebrate Christmas (and Easter) again.

Although the puritan laws were overturned following the Restoration, one tradition had become sufficiently entrenched as to linger on and is still to this day an important idea for most Christians. Sunday was now a special day – and while its uniqueness has been slowly eroded, we still treat Sunday as a traditional day off work.

As you read your Sunday papers or visit the Garden Centre, offer a tiny thought of thanks to those long dead Puritans.