On Sunday, as part of the London Open House Weekend – I had a tour of London’s last remaining Gin distillery – which produces Beefeater London Dry Gin. The other so-called London Dry Gins (the ones in distinctive green bottles) are not actually made in London any more.

I had actually written to them about a year ago asking if they ever let the public inside, so when it appeared on the Open House tour guide I was quite excited and told friends about it. 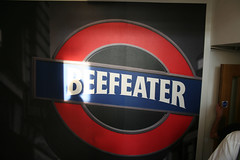 So, four of us turned up – and joined a tour with about about 6 other people for the final tour of the day, and the weekend.

Initially, we were amazed to learn that just 12 people work in the building – including the office staff – and they still manage to produce some 30 million bottles of gin per year, with 98% of it exported. They no longer bottle the gin on site, but ship it to Scotland where the parent company has an existing bottling plant for other drinks, which they share.

We started off with a bit of history of gin and the company behind the Beefeater brand, and then for a view of the huge distilling tanks and condensers where the hot alcohol vapour is cooled down to a fluid again.

The Burroughs family which effectively founded the brand did not actually found the gin distillery – but brought a basic company and built it up themselves – and later moved to the current site, which was originally a factory which supplied pickles to the military! In the 1960s, a modern extension was added and plans exist to add a 21st century style entrance to the building.

We also had a very informative chat about (and sampling of) the botanicals that are added to create the unique flavour – and the company employs a “master distiller ” who has to take samples of herbs each year and mix them to create a consistent flavour year after year. Apparently, he gets some 200 different supplies per year to work through and narrow down to the correct blend, and there only maybe four people in the UK with the necessary skills.

I was also interested to learn that the Juniper berry which underpins Gin is still collected manually and cannot be cultivated – so the distillery always keep two years stock, just in case supplies fail (as they have been known to do).

Every evening, they also weigh out the grains and botanicals to be used the following day – and despite all the automation the place, they still use an old manual set of weighing scales to do this most important of tasks – one tiny mistake and the flavour is ruined. 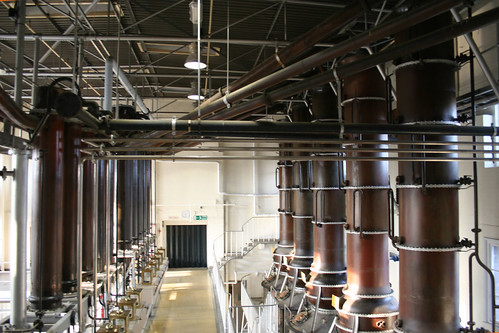 After the tour, we were taken to the distilleries very own private bar (woo!) and a complimentary gin and tonic was offered while the master distiller turned up and answered our many (if sometimes frivolous) questions.

I also picked up a book published by the firm which goes into the history of gin.

It was a really fascinating visit – and you may be interested to learn that they are planning to build a public museum and education center on the site which will hopefully open sometime next year. This will detail not just the Beefeater Gin, but the whole history of London Gins and the different companies which produced it.

Should prove to be quite a tourist attraction when it opens, especially remembering that most of the gin is exported to overseas markets.

Many thanks to Beefeater for the tour, the book and free G&T to round it all off.