Beating the Bounds is an ancient custom still observed in many English parishes on Ascension Day – the 40th day after Easter – including, fortunately for me, a parish within the City of London.

The roots of the tradition go back to mediaeval times when parishes reaffirmed their boundaries by processing round them at Rogationtide (a pagan festival), stopping to beat each boundary mark with wands and to pray for protection and blessings for the land.

The parade was also important as in the times before reliable maps, knowledge of the limits of each parish needed to be handed down so that such matters as liability to contribute to the repair of the church, and the right to be buried within the churchyard were not disputed.

The Catholic side of the tradition was frowned upon during the reign of Queen Elizabeth I, and the whole thing was outright banned by Lord Protector and all round misery guts, Oliver Cromwell.

The tradition was revived around the middle of the 19th century as part of the general Victorian trend to try and recapture a lost pre-industrial “ideal” that many, mainly city dwelling folk had a rose-tinted nostalgia for.

Here in London, each year students from St Dunstan’s College in Catford return to the City parish of St Dunstan-in-the-East, beside the Tower of London and continue the tradition of processing around the parish and dutifully beating the ground in select areas to assert the parish’s control over the area.

Every third year, the ceremony is extra-special, as it includes a ‘confrontation’ with the Resident Governor and Yeomen Warders of the Tower of London at the boundary mark shared by the Tower and the Church. The next such confrontation is due next year (2011).

I wandered over yesterday to catch the start of the tradition, as the procession meanders down from All Hallows Church to the riverside. A boat then takes the group out to the middle of the river, which marks the parish’s southern boundary, and a girl leaned out to ritually thrash the river.

I gather that sacrificing a virgin girl to the River Gods is rather frowned upon now, as is the apparent previous practice of holding the child over the edge of the boat to hit the river. Now she used a very long stick and was kept firmly inside the boat. Boo, hiss!

As the river was involved, in addition to various people in formal livery wear, the Company of Watermen and Lightermen sent along some of their men to carry ceremonial oars.

After returning to the shore, the procession made its way round to Custom House. A short speech followed by beating the pavement (not too hard, but be vigorous about it) and a hymn, then the gang moved on to the next spot.

I had to leave at that point due to that irritating issue about earning a wage, but I will be back next year for the “confrontation”. 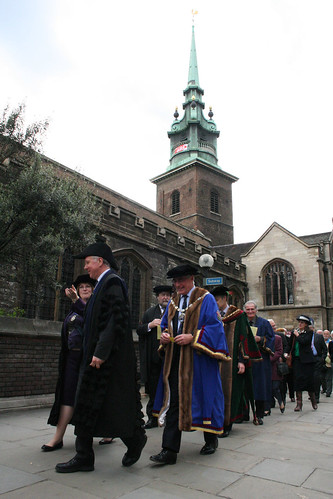 City worthies leaving All Hallows by the Tower Church 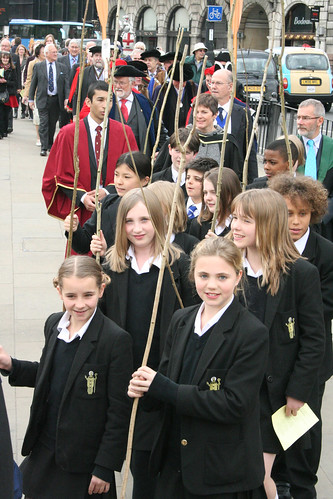 The beaters of St Dunstan's College 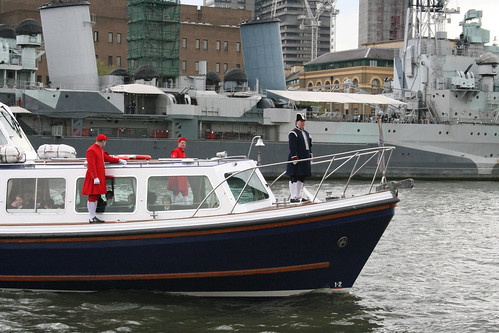 Watermen escort on the boat carrying the beaters and worthies 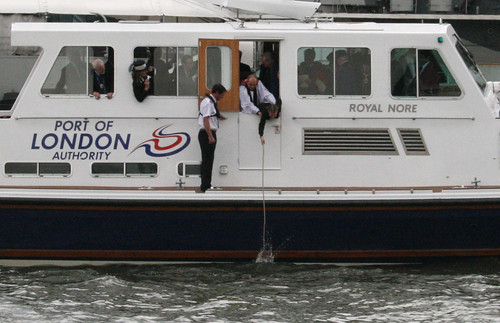 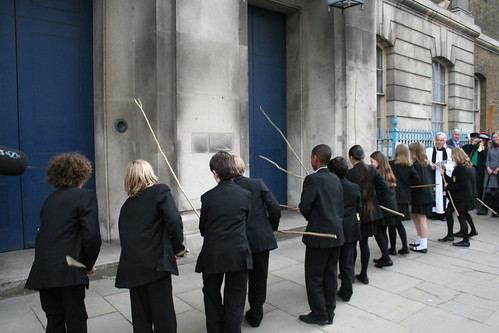 1 Pings/Trackbacks for "Beating the Bounds and Thrashing the Thames"