After more leaks than a welsh conference, TfL has formally announced a consultation on plans to extend the Bakerloo line.

It’s not the first time that an extension has been planned, although locals will doubtless hope that this will be the last time that the carrot is held out, and that finally something might be done.

Curiously, the extension is less to do with expanding transport provision in an area lacking it — that is more of a really useful side effect. The main benefit is to get rid of a really bad bottleneck at Elephant and Castle.

In railway design, an ideal plan would be to have a line that runs a decent length from a major station so that trains can terminate half way along the line and turn around, or run to the end of the line.

That gives the network capacity to empty trains and turn them around at multiple locations. The Bakerloo line for example can turn around trains at Queen’s Park, sending empty trains southbound just a few stops north of the busy Paddington station.

At the southern end though, there is just one station, Lambeth North before you hit the terminus at E&C, which itself has just two platforms. That massively restricts how fast you can turn around trains at the southern end of the line, which in turn affects capacity along the entire line.

Now, if there were more stations at the southern end, it might be possible to stop some trains short and turn them around, thus substantially increasing the number of trains that can run along the rest of the line.

Right now, E&C is a bottleneck that affects the entire Bakerloo line and holds back any plans to increase the frequency of trains and increase capacity for passengers.

So, although the Bakerloo Line extended in fits and starts ever northwards from its original Baker Street terminus, plans to move southwards from Elephant and Castle have been mired in grand ideas and less cash.

One of the earliest proposals was made in February 1931, when a Bill was proposed for a £1.87 million extension of the line to Camberwell Green. The proposal was for a 1 3/4s mile line, with two stations — one at the junction of Albany Road and Camberwell Road (next to Burgess Park), and the other the terminus at Camberwell Green[1].

It was said at the time that if the Bill passed by August 1931, then the extension would open to passenger by the end of 1933.

Part of the argument, according to Lord Ashfield[2] to be related to some sort of commitment to rebuilding the station at E&C, so the extension would be cheaper at that time, and that they had a pot of cash to spend, and nothing to spend it on. They would have also added a third platform at E&C to offer the valued ability to turn empty trains around at that location.

However, the plans were resurrected in 1949, with a grand announcement that works on the extension would commence the following year.

Lord Latham, chairman of the London Transport Executive made the claim[3] noting that in addition to the additional transport facilities, it would also offer the Bakerloo line improved reversing sidings at Camberwell, enabling them to run a quarter more trains per hour.

By now, the extension, including the sidings was a two-mile length and the cost had risen to £3.5 million — which included £1 million for new trains and £600,000 for more depot space at Stanmore.

They were so confident that the extension would go ahead that it even appeared on some tube maps, and some station signs along the line was adapted to include the new terminus.

The proposal was passed to the Minister of Transport, and I am sure we can all guess the response.

Another study in 1969 agreed yet again that a Bakerloo extension should be a high priority for London Underground now that it had opened the new Victoria line.

It took another 20 years for another report to say pretty much the same thing. The Central London Rail Study by the Department of Transport was one of the early reports proposing both the current Crossrail line and its likely Crossrail 2 successor. It noted that the Bakerloo extension was desirable, but felt that the rest of the network was already too congested to be adding to passengers at the time.

In 1988, another proposal from the London Regeneration Consortium[4] could have seen the Bakerloo line extended to Canary Wharf, as an alternative to the eventual Jubilee line extension. Although to offset the loss of the Camberwell extension, the Northern line would have inherited that particular project.

More recently, in 2005[5], a report by TfL outlined a number of congestion hotspots, and mentioned the Bakerloo extension, but more in passing, and as an area of concern, but without any form of timetable.

In 2010, the London Mayor’s Transport Strategy again noted the extension, but now seemed less of a small section of tunnel to Camberwell than a much larger extension that would hook up to overground lines and relieve congestion in South London. In a way, they would be using the Bakerloo line much in the same way as the Overground was slotted in between existing services along the Clapham Juntion extension.

This time the longer extension is seen as diverting some passenger traffic from heading into London Bridge and taking it directly into Waterloo and thence to the west-end.

Then last year chatter about the extension picked up again. No definitive plans, just lots of chatter which is usually a sign that someone somewhere is planning something, and leaks are getting out. In recent months Boris has repeatedly hinted at a major announcement, and most of what has been announced today has already been leaked.

Yes, the Bakerloo line extension is on again. 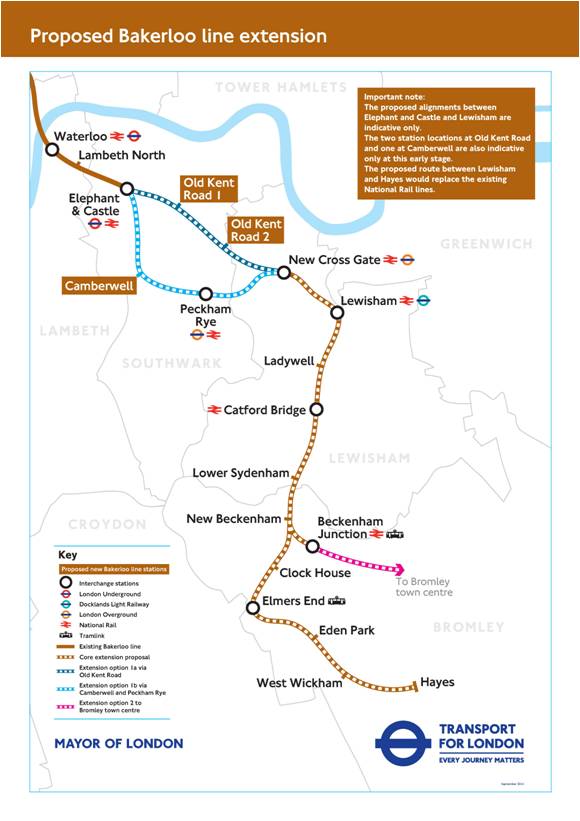 However, the extension would almost certainly not run to Camberwell. Despite having been the planned route for 80 years, today the preferred option is straight down the Old Kent Road towards New Cross and Lewisham.

A cheaper option then stops at Lewisham — or the option that is likely to have locals campaigning like mad to get, would see it run over the existing National Rail line down to Hayes. Currently, six trains per hour use the Hayes line to London Bridge. An extended Bakerloo line to Hayes could mean up to 15 trains per hour could serve this route.

The cost of extending the Bakerloo line, as far as Hayes, is currently estimated between £2 and £3 billion. Despite that, the tone of the wording in the consultation is clear — TfL prefers the New Cross to Hayes option.

The Camberwell-Peckham route hasn’t been totally ruled out, but it looks less likely now. A long mooted plan to reopen Camberwell’s mainline station that closed in 1916 may mollify locals. If it goes ahead.

If funding is identified, construction could start in 2023 but the extension won’t open until 2030.

The extension would therefore open almost exactly 100 years after it was first planned.