Published 28 January 2012 by Events and Tours

The Ceremony of the Constable’s Dues is one of those ancient traditions that the UK is so damn good at, can be indirectly traced back at least 700 years, and is related to the Crown’s authority over the City of London.

During the Middle Ages, successive Kings believed it was their right to extract tolls from vessels on the Thames. On the King’s behalf, the Constable of the Tower of London was empowered to demand these tolls as a perquisite of his office.

Formerly, in the absence of the Sovereign at the Tower of London, the Constable would have been amongst the most powerful men in the city. As well as being one of the most honourable positions in the Crown’s service, it was also one of the most profitable. Perks of the job included any horses, oxen, pigs or sheep that fell off London Bridge. For every foot of livestock that stumbled into the Tower moat, the Constable received a penny and any cart that fell in became his property.

Every ship that came upstream to the City had to moor at Tower Wharf to unload a portion of its cargo for the Constable and thus enjoy the protection of the Tower of London guns.

In the past, such bounty would have included oysters, mussels, cockles, rushes and wine. This year, the Tower’s Constable, General Lord Richard Dannatt, was presented with a barrel of wine by the Commander of HMS Liverpool which is currently moored in West India Docks.

As the Destroyer, HMS Liverpool is currently moored in the docklands, some of the Navy Ratings arrived early, and paradoxically, marched through the grounds of the Tower – a space they were to be shortly challenged for entering. 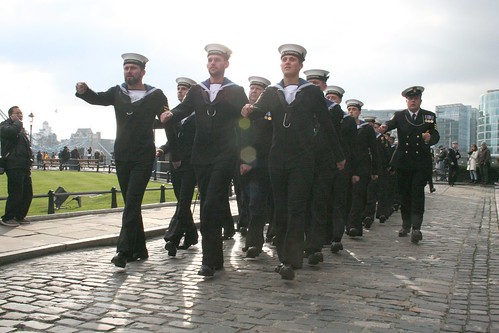 At the event started, out of the Tower marched the Band of Her Majesty’s Royal Marines, Collingwood who would provide the musical accompaniment, and then the senior Yeoman Warders (Beefeaters). 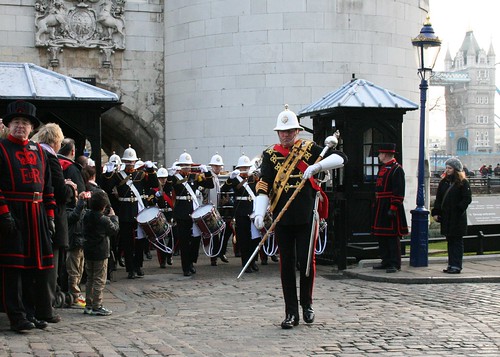 A bit of waiting around for the event to start with three of the four main gates closed, and tourists peering through to see what was going on. They may have been held behind gates, but lucky tourists getting a bit more of a show than usual.

At the stroke of noon, the representatives from HMS Liverpool approached the Tower, with Commander Colin N O Williams BSc at the head, and as they got close, the gates were firmly closed in their face. Unlike Black Rod, they don’t bang on the gates, but explain rather politely that they are here to pay their dues to the Constable. 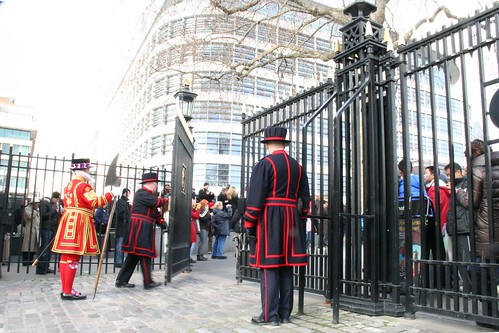 The Yeoman Gaoler armed with his infamous axe approved their request, the gates opened, and in marched the Royal Navy’s representatives. 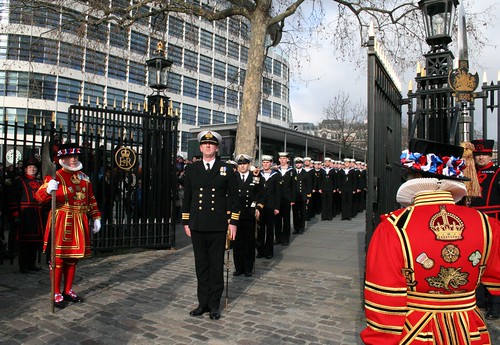 Passing into the Tower via the main West Gate, they progressed around the White Tower, while several of us being escorted by the Tower’s staff were given a good vantage point on some stairs to look down – then went around the other side of the Tower to wait for them to arrive at Tower Green where the handover of the Dues was to take place. 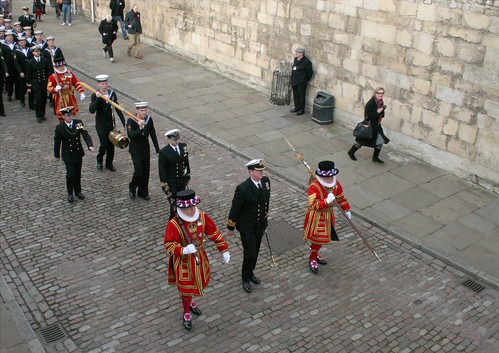 The barrel of wine is today quite small, and more ceremonial than functional, although the senior officers do indeed drink the contents afterwards. 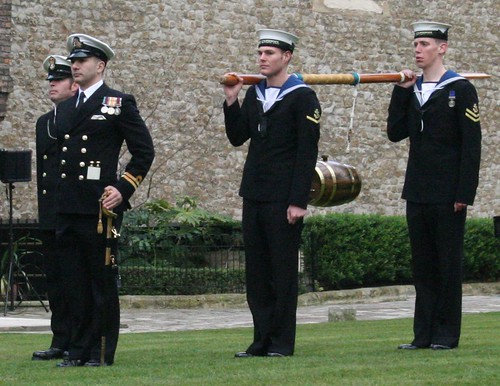 A load of pigeons were on the Green, and I had hoped they would be scared off by the marching band and give me a good photo – but they flew off early. Oh well. Turned out that the famous ravens were in their aviary as well today for unrelated reasons.

Out came the Constable of the Tower, Lord General Richard Dannatt with several attendants, and waited at a table by the Green, as the band and the rest of HMS Liverpool’s sailors and officers took up their positions.

With the Constable flanked by senior Beefeaters, Commander Williams read out a scroll confirming the heritage of the ceremony and offering payment for the protection offered by the Tower. The barrel of wine presented, it was later taken into the building behind them for drinking later, and then the group marched off and that was the ceremony over for another year. 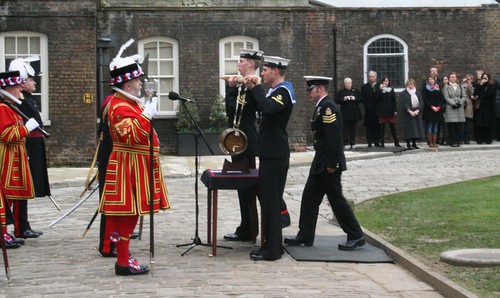 What was once a very serious issue of paying for a service is today a quaint ceremony, and one that is carried out about once a year within the Tower. Due to the Navy tending not to publicise their visits to London more than a few days in advance, knowing that the Ceremony is due to take place is often a case of good luck.

Fortunately, after several years trying, I was able to photograph the event at last – and thanks to the Tower staff for offering the chance to photograph with better than average access. 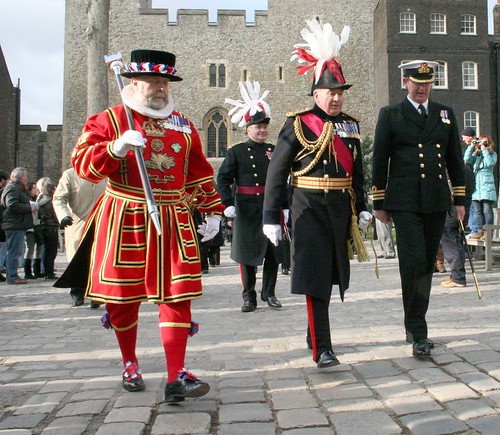 You can see the full set of photos in the gallery.